Sotto: 2021 budget bill to be vetoed if anti-insurgency funds realigned 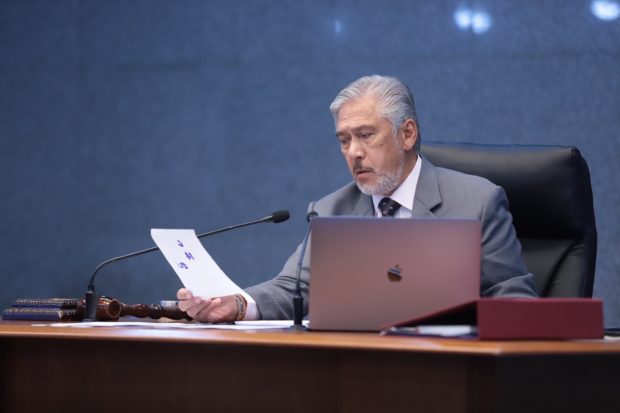 MANILA, Philippines — President Rodrigo Duterte may veto the 2021 budget bill if the funds for the government’s anti-insurgency efforts will be realigned to augment funding for the COVID-19 vaccination program and calamity response, Senate President Vicente Sotto III said Monday.

Sotto said it is part of the legacy of the Duterte administration to eliminate local  communist armed conflict and the executive branch will not allow the realignment of anti-insurgency funds.

“As [far as] the Palace is concerned, I assure you, if you ask DBM Sec. [Wendel] Avisado, DOF Sec. [Carlos] Dominguez, and the President, I don’t think they will allow that [realignment],” he told reporters in an online interview.

“‘Pag ginalaw namin ‘yun [anti-insurgency funds], I am sure ibe-veto. It’s part of the legacy of this administration eh. So, I assure you, if we touch that, that will be vetoed,” Sotto added.

Senate Minority Leader Franklin Drilon said the minority bloc will move to realign the P19-billion anti-insurgency 2021 budget to “set the correct priorities in the budget principally to address the pandemic and the calamities.”

He noted that according to the Department of Health (DOH), the government must vaccinate 60 percent of the 105-million population of the Philippines to achieve “herd immunity.”

But the proposed P8-billion budget for the vaccine under the House-approved General Appropriations Bill (GAB) is “just grossly inadequate,” according to the minority leader.

In a separate interview, Drilon said the government must at least have a budget of P30 billion to inoculate at least 30 million Filipinos starting July 1, 2021.

Sotto said the needed funds may be sourced from other departments, such as the Department of Public Works and Highways, which, he said, has P68-billion worth of “questionable” funds.

(What if we can find other sources of fund? If we find excess or anomalous fundings in other departments that we can use to augment funds for COVID-19 vaccine procurement and calamity funds, why would you target the anti-insurgency funds?)