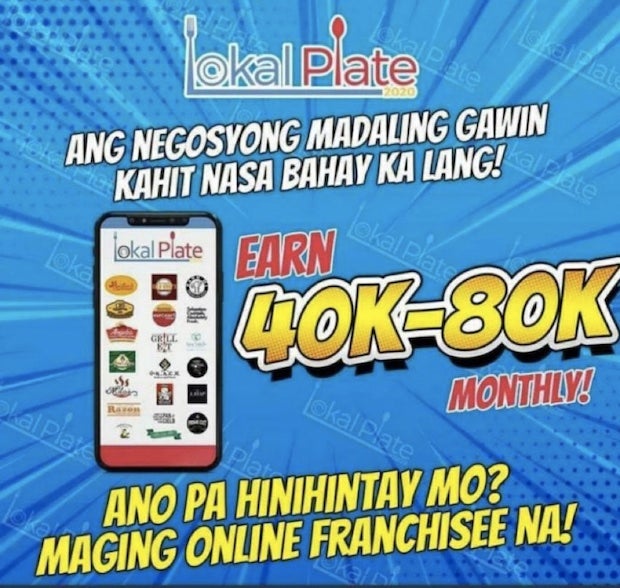 A Lokal Plate online announcement on its Facebook page

MANILA, Philippines — The National Bureau of Investigation has started an investigation of some franchises being offered online on various social media platforms like Facebook.

The NBI identified one of them as Lokal Plate, which has an announcement on Facebook offering each “online franchisees” an income of P40,000 to P80,000 a month.

Radyo Inquirer obtained a subpoena dated Oct. 26 asking those behind Lokal Plate to appear before the NBI on Nov. 3 to give their side on an investigation being conducted by the Cybercrime Division.

According to Agent Francis Senora of the Cybercrime Division, the investigation was launched due to inquiries made by some individuals about Lokal Plate.

“We have received reports from individuals regarding different online businesses offering online franchises and one of which is Lokal Plate,” Senora said. “We have already conducted our initial inquiry. Likewise, coordinated the same with the company (Lokal Plate) and with related government agencies. We are still waiting for their replies.”

Senora stressed that Lokal Plate was not being singled out and that the investigation was being conducted for the “general welfare of the public.”

Other similar business models are under investigation as well.