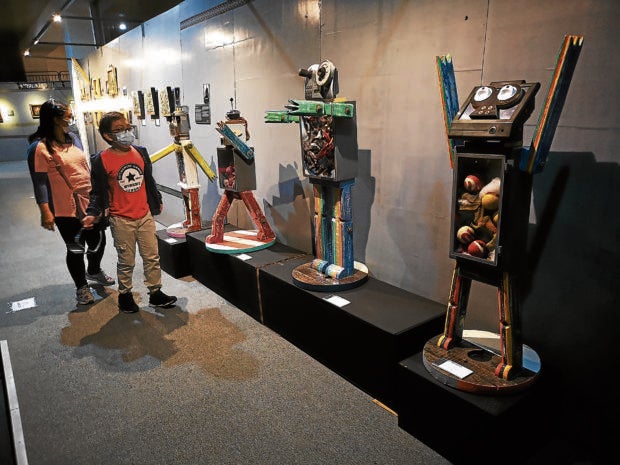 DO NO HARM Armed with masks, Baguio residents get to visit robot art installations and paintings exhibited at the Baguio Convention Center in this year’s Ibagiw, the Baguio Creative City Festival. The summer capital has eased most quarantine restrictions within the city but has reimposed stringent border controls as coronavirus cases surge in neighboring Benguet towns. —EVESPIRITU

BAGUIO CITY, Benguet, Philippines — The neighboring towns of Baguio have started to grapple with mounting complaints and requests for medical certificates from their residents due to the regulated cross-border movement between the city and Benguet province.

Restrictions at the city’s boundaries with La Trinidad, the Benguet capital, and the towns of Tuba, Sablan and Tublay were imposed due to concerns raised by the medical community that severe coronavirus cases were being treated at hospitals here.

Reports of harassment of Benguet residents, including that of a provincial official and his family, at the border checkpoints surfaced on Sunday.

Some Benguet residents complained that police manning the checkpoints had already been requiring medical certificates to cross the border even if this should only be enforced starting on Nov. 27.

During the weekend, Benguet officials had asked Mayor Benjamin Magalong to withdraw this order.

Local health officials, including doctors and nurses, had asked for the tighter border regulations to allow Baguio and its neighbors time to pinpoint people who frequently cross territories each day so they could be monitored and tested regularly, Magalong said on Sunday.

Front-line health workers said they needed this information to sustain a projected slowdown of infections, following a surge of cases in September and October.

Since the Luzon lockdown in March, the number of infections in the city had risen and ebbed, until two outbreaks at the city abattoir and a housing site for police trainees triggered a rapid increase.

Reports on the trend of infections from March to Nov. 20 showed “the number of daily confirmed cases has been increasing in the latter days … [and] may be due to the continued expanded testing, contact tracing, and less stringent quarantine restrictions and protocols in the city.”

Public movement between Baguio and its neighbors have been relaxed to speed up the recovery of their respective economies.

But during a Nov. 15 meeting with Magalong, health workers reported that new cases involved elderly patients with severe symptoms. They had asked for stricter regulations at the city’s boundaries with La Trinidad and the three other towns, where cases had increased following outbreaks in the mining communities of Tuba and Itogon.

Magalong said he had discussed this proposal with Benguet Gov. Melchor Diclas and the mayors, and offered to help improve their data gathering systems and expand testing to determine which sectors had higher risks of contamination.