Detained activist Reina Mae Nasino on Friday asked the Supreme Court to dismiss the Manila Regional Trial Court (RTC) judge who issued an order in August separating her from her infant daughter, who died of complications two months later.

In an administrative complaint filed by her mother, Marites Asis, and their counsel from the National Union of Peoples’ Lawyers (NUPL), Nasino accused Judge Marivic Balisi-Umali of Manila RTC Branch 20 of gross misconduct and gross ignorance of the law when she dismissed Nasino’s petition in July to be allowed to breastfeed her newborn daughter, River Emmanuelle.

They said Nasino had that right in accordance with law and international rules on the treatment of women detainees.

The 23-year-old activist gave birth to River on July 1, months after she was arrested by the police in a raid on an office of the militant group Bagong Alyansang Makabayan (Bayan) in Tondo, Manila, in November 2019.

Nasino was detained and charged in Umali’s court with illegal possession of firearms and explosives.

Soon after River’s birth, Nasino asked the court to let her continue caring for her baby. The petition was denied and, in August, the court ordered the mother’s separation from her daughter, who was turned over to Asis. 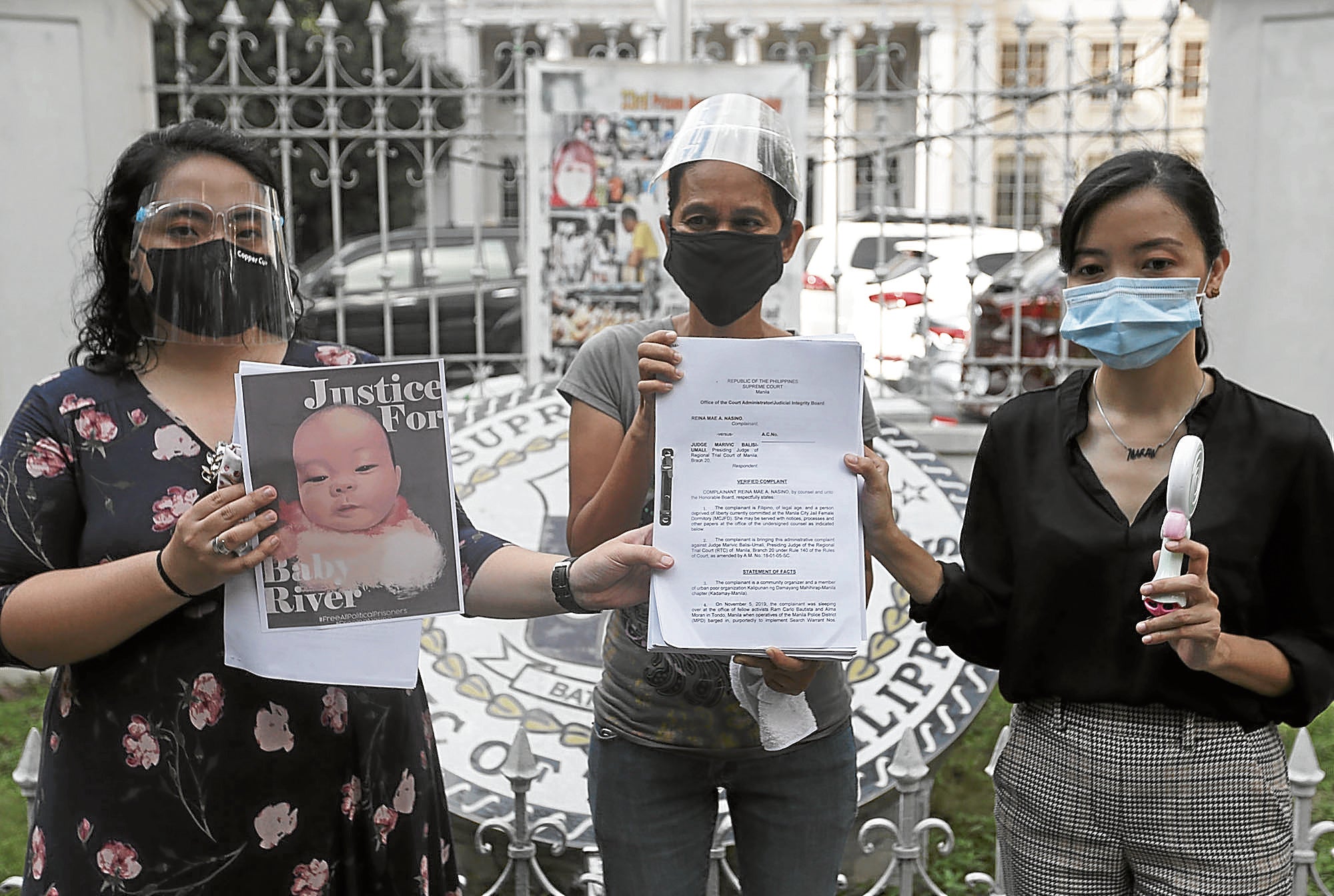 In the complaint seeking Umali’s dismissal from the judiciary, Nasino argued that the judge’s order ran counter to “international law and domestic statutes recognizing mother and child’s right to breastfeed, as well as the best interests of the child.”

It cited as legal basis the Expanded Breastfeeding Promotion Act of 2009 (Republic Act No. 10028) and the policy on lactation station of the Bureau of Jail Management and Penology (BJMP).

Not only did Umali “commit errors of judgment, she unreasonably defeated the very purpose of the law and the rules under consideration and unfairly prejudiced the health and life [of the child],” it said, adding:

“Indubitably, the respondent judge’s assailed orders gave way to the decline of baby River’s health, which eventually led to her tragic death (on Oct. 9).”

“[Umali’s] dismissal from the service is imperative,” the complaint said. “Even if this will not bring back baby River’s life or fill the void that she left in her mother’s heart, it will relieve the bench—and the public—of a magistrate who has lost the requisite competence, integrity and impartiality that are fundamental to her office.”

Another court granted Nasino’s petition to be at River’s wake—but only for two days— at a Pandacan funeral parlor on Oct. 14 and to be at the child’s burial on Oct. 16.

Security arrangements for the funeral, however, came under heavy criticism from Nasino’s supporters, netizens and some politicians for being an “overkill,” as more than 20 police officers and jail guards in battle gear were deployed to control the crowd.

NUPL said Nasino may also file charges against the police and BJMP for their “inhuman and degrading” treatment of the grieving mother. —WITH A REPORT FROM JODEE A. AGONCILLO