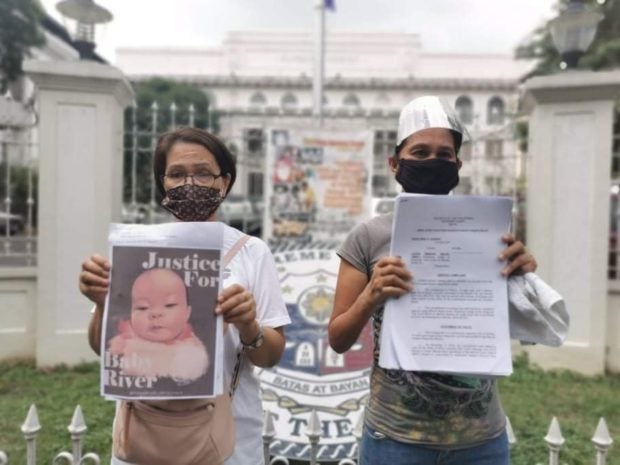 An administrative complaint has been filed against a Manila Court judge who previously handled the case of political detainee Reina Mae Nasino. Photo from Kapatid

MANILA, Philippines— Political detainee Reina Mae Nasino on Friday sought the dismissal of the Manila Court judge for her “conscious indifference” over her case that led to the death of her three-month-old child.

The 44-page complaint by Nasino through the National Union of Peoples’ Lawyer (NUPL) against Manila Regional Trial Court Judge Marivic Balisi-Umali has been submitted to the Judicial Integrity Board (JIB), the body tasked to act on administrative complaints against judges.

Balisi-Umali originally handles the criminal case against Nasino and two others. She later on inhibited from the case. Before she inhibited, she issued several rulings, including denying her motion to quash or dismissing the complaint against her. She also denied Nasino’s motion that she be allowed to stay with her newborn child “Baby River” at the hospital or the prison nursery to breastfeed as required under the Expanded Breastfeeding Promotion Act of 2009.

The Judge also denied Nasino’s supplemental urgent motion for pediatric and post-natal checkups. She also ordered that Baby River be separated from her mother, quoting a letter from the Manila City Jail that it has no facility to be used as a nursery.

The Manila Court, in its ruling, quoted a circular from the Bureau of Jail Management and Penology (BJMP), which stated that a baby born in detention could only stay with the mother for a month.

But NUPL said the specific portion of the BJMP circular was followed by a caveat that states that the period may be extended based on the recommendation of medical personnel to the child’s best interest.

In compliance with the court’s order, the mother and baby were separated on Aug. 13. The Manila City Jail also prohibited Nasino from expressing her breastmilk by confiscating her electric breast pump.

Baby River died barely two months after being separated from her mother.

“She should be held accountable for her unjust interlocutory orders that enabled the continuing violation of the complainant’s constitutional rights and gave way to the forcible weaning of her newborn child, which led to her serious illness and eventual demise. Baby River’s death is on her doorstep,” read the complaint.

Nasino has accused the judge of gross ignorance of the law and gross misconduct for violating Canon 3 of the Code of Judicial Conduct, specifically the non-performance of judicial duties with impartiality and diligence.

At the same time, they also took note of the judge’s refusal to issue a subpoena to the application of search warrants, which was used to arrest Nasino and her co-accused. When the subpoena was issued, they said it was already late because their motion to quash the information or charge sheet has been denied.

“The respondent judge’s cavalier disregard of the clear and unmistakable provisions of statutes which were applicable to the complainant’s ordeal upended the presumption of regularity and good faith in her performance of judicial functions. She displayed utter lack of familiarity with the rules, betraying the confidence of the public in the courts,” read the complaint.

NUPL said the judge’s dismissal from the service is imperative ” even if this will not bring back Baby River’s life or fill the void that she left in her mother’s heart, it will relieve the bench—and the public—of a magistrate who has lost the requisite competence, integrity, and impartiality that are fundamental to her office.” [ac]