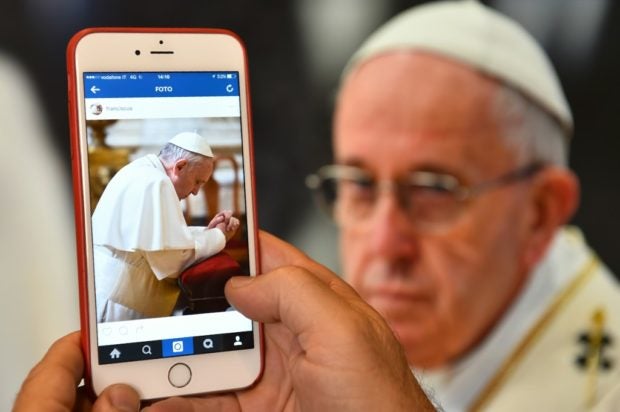 A man looks at the Instagram account of Pope Francis (Franciscus) on March 19, 2016, in Rome. Image: Gabriel Bouys/AFP

The pope’s official Instagram account is being probed after it was caught liking a photo of a model baring her posterior.

The “like” from the account @franciscus was shared on social media on Nov. 13 and was removed the following day. By then, Brazilian model Natalia Garibotto and outlets like Barstool Sports had taken video screen captures of the controversial “like.” The picture featured Garibotto in a racy schoolgirl outfit.

The pope’s social media accounts are handled by a team, sources close to the Vatican press office told the Catholic News Agency in a report on Tuesday, Nov. 17. An internal investigation is ongoing to find out how the supposed slip of the thumb occurred. The pope’s Instagram account, with a following of 7.4 million, does not follow anyone.

The Holy See Press Office declined to comment on the matter, as per CNA.

Garibotto, meanwhile, has described herself as “blessed” and quipped that she was going to heaven after the incident.  /ra

American vlogger catches Pacquiao’s IG commenting on her live video: ‘You can call me anytime’