Only 10 out of 5,000 DepEd classrooms targeted for 2020 built so far | Inquirer News
Close
menu
search 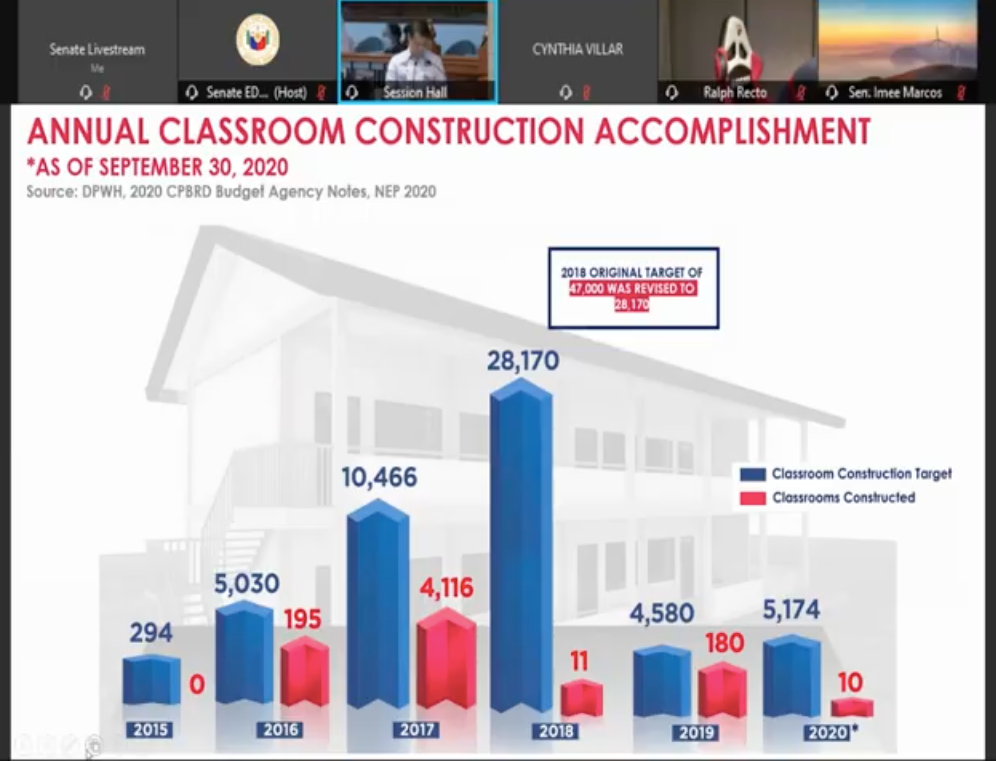 Screengrab of Sen. Sherwin Gatchalian’s presentation during the Senate deliberations on the proposed 2021 budget of the Department of Education on Thursday, Nov. 19, 2020.

MANILA, Philippines — Only 10 of the over 5,000 classrooms targeted to be constructed in 2020 under a school building program of the Department of Education (DepEd) have so far been built, Senator Sherwin Gatchlian disclosed Thursday.

During the Senate debates on the proposed budget Department of Education (DepEd), Gatchalian presented a graph which showed the “highly questionable” absorptive capacity of the Department of Public Work and Highways (DPWH) in terms of building classrooms.

The DPWH is the agency tasked to implement the school building program funded under the DepEd’s budget.

Gatchalian’s presentation showed that in 2018, only 11 of the 28,170 target classrooms were completed.

“It’s not really the fault of DepEd that the absorptive capacity of DPWH insofar as building classrooms is really highly questionable,” said Gatchalian, who also chairs the Senate basic education committee.

“In fact it seems to me, I just did some simple analysis, it takes them about two years to build classrooms from start to end,” he added.

The senator noted that in a previous committee-level hearing on the budget of the DPWH, senators were told that the agency only received the DepEd funds for the construction of these classrooms last June.

“And it took them close to about three or four months from getting the funds all the way to building and constructing and they only have 10 classrooms to date,” Gatchalian said.

The DPWH’s absorptive capacity, according to him, was the reason why he recommended the deduction of funds under DepEd’s school building program.

Gatchalian’s recommendation was accepted by the finance committee, he noted.

Under the 2020 budget of the DepEd, P24.5 billion was allocated for the construction of basic education facilities.

But in the Senate version of the budget bill, which contains the 2021 proposed budget, funding for this program was reduced to P14 billion, according to Senator Pia Cayetano, who was defending DepEd’s budget.