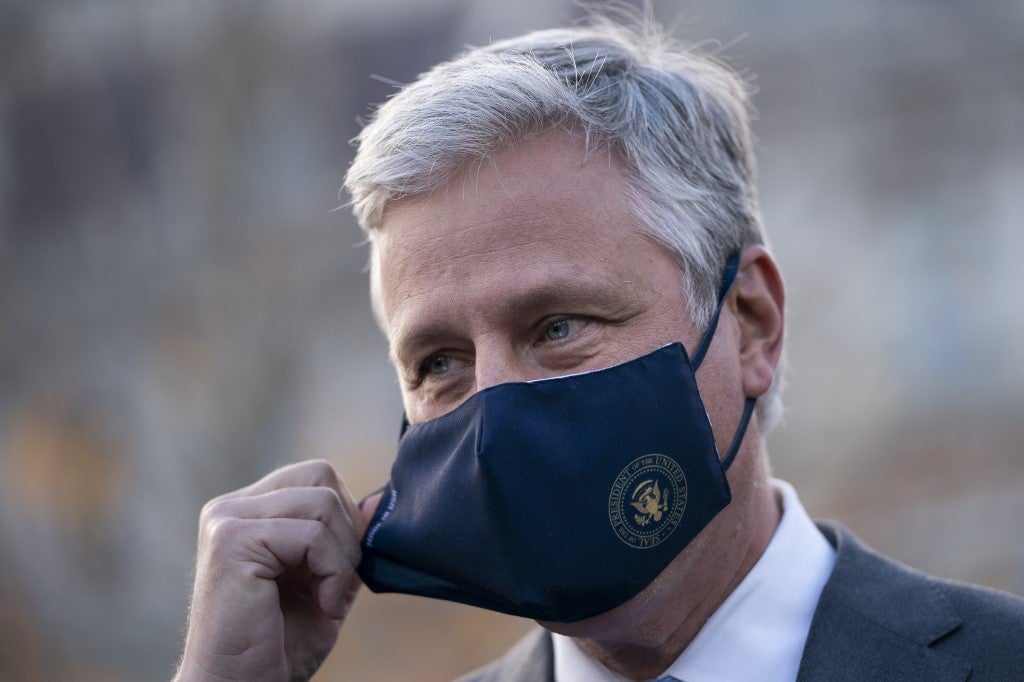 WASHINGTON, DC – NOVEMBER 17: National Security Advisor Robert O’Brien removes his face covering as he speaks to reporters outside the West Wing at the White House on November 17, 2020 in Washington, DC. Drew Angerer/Getty Images/AFP

WASHINGTON—White House national security adviser Robert O’Brien is on his way to Vietnam and the Philippines, countries that share U.S. concern over China’s increasingly assertive behavior and extensive maritime claims in Asia, the White House said on Wednesday.

Tweets from the White House National Security Council said O’Brien would meet leaders in both countries “to reaffirm the strength of our bilateral relationships and to discuss regional security cooperation.”

O’Brien’s trip follows a visit to Hanoi last month by U.S. Secretary of State Mike Pompeo. That visit came a week after Vietnam freed a Vietnamese-born U.S. citizen, Michael Nguyen, who had been sentenced to 12 years in prison for “attempting to overthrow the state.”

Washington also has concerns about human rights in the Philippines, where President Rodrigo Duterte has been engaged in a war on drugs in which thousands of urban poor have been killed, many in mysterious circumstances.

On a visit last year, Pompeo assured the Philippines that Washington would come to its defense if it came under attack in the South China Sea, where Manila has competing claims with China and other countries, including Vietnam.

The administration of U.S. President Donald Trump, who was defeated in his Nov. 3 re-election bid and is due to hand over power to President-elect Joe Biden on Jan. 20, had declared the Asia-Pacific and competition with China a foreign policy priority.

Trump faced criticism from former officials and other commentators for having O’Brien take part in his place in last weekend’s virtual East Asia Summit, on the sidelines of which 15 countries, including Vietnam and the Philippines, signed a major China-backed regional trade deal.

Trump plans to represent the United States at a virtual Asia-Pacific summit this week in which his Chinese counterpart President Xi Jinping plans to take part, a U.S. official told Reuters.