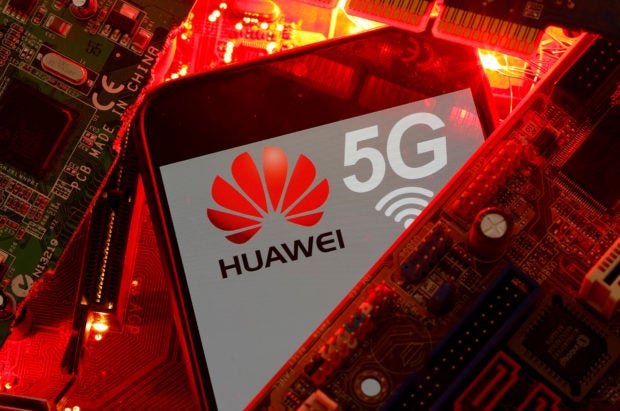 FILE PHOTO: A smartphone with the Huawei and 5G network logo is seen on a PC motherboard in this illustration picture taken January 29, 2020. REUTERS/Dado Ruvic

OTTAWA — Canada’s opposition on Wednesday called on Liberal Prime Minister Justin Trudeau’s government to get tougher on China, including by officially banning Huawei Technologies Co Ltd’s 5G technology from being used in the country.

Opposition parties passed a non-binding motion put forward by the Conservatives calling China a threat to Canadian interests and values, and urging the government to draft a plan to “combat China’s growing foreign operations” in Canada.

“We call on the Liberal government to finally grow a spine and make a decision on Huawei’s involvement in Canada’s 5G network,” Conservative leader Erin O’Toole said.

5G networks offer data speeds up to 50 or 100 times faster than 4G networks and are expected to power everything from telemedicine and remote surgery to self-driving cars.

Trudeau heads a minority government that depends on one of three opposition parties to pass legislation and stay afloat. Last month, the prime minister appeared to seek an early vote, without success, but many in Ottawa now expect a snap election next year.

The arrest of Huawei Chief Financial Officer Meng Wanzhou in Vancouver on a U.S. arrest warrant two years ago put Canada in the middle of the U.S.-China trade war, and Ottawa continues to struggle to respond to Beijing’s aggressive tactics.

After Meng’s arrest, China arrested two Canadian citizens for alleged spying, and they have been imprisoned ever since. China also cut off imports of canola. Meng is fighting extradition to the United States.

Trudeau’s government has put on hold any decision on whether to allow Huawei 5G technology, even though Ottawa’s main allies in the intelligence-sharing Five-Eyes group – the United States, the UK, Australia and New Zealand – have all taken steps to ban Huawei.

Trudeau repeated that the government was awaiting a recommendation from the country’s intelligence agencies.

The opposition motion, which passed 179-146, called on the government within 30 days to officially ban Huawei 5G and come up with a plan to counter Chinese operations aimed at intimidating Chinese nationals living in Canada.