MANILA, Philippines — Sen. Panfilo Lacson bared “huge” infrastructure allocations for congressional districts under the 2021 budget, with allocations for 220 districts amounting to over P1 billion, the highest of which is P15.3 billion.

Lacson made the disclosure during the Senate plenary debates on the budget of the Department of Public Works and Highways (DPWH) early Thursday.

“According to our sources, they [House legislators] have a hand in the preparation of this list. So I’m not blaming the department when it appears this way. Because practically, congressmen were the ones who made this list,” the senator said.

The senator presented a list that showed how allocations for each district were increased from the National Expenditure Program (NEP) — which was prepared by the executive department — to the General Appropriations Bill (GAB). 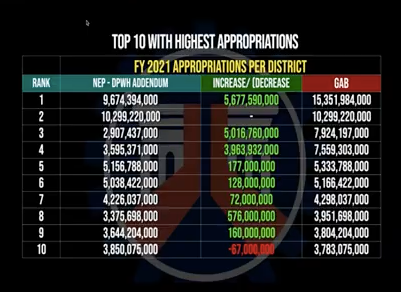 The GAB is the House-approved budget measure transmitted for the scrutiny of the Senate.

“Colleagues, all I can say is, pity yourselves. Those of us who may have individual insertions will make you look like barangay kagawads compared to our House counterparts,” Lacson said.

According to him, the 220 districts that got the highest proposed funding have an allocation of over P1 billion.

The lowest allocation among the districts amounts to P620 million, he added.

The infrastructure allocations for the congressional districts totals to over P474.8 billion, he added.

The senator did not include in his presentation which district got which allocation.

“I chose not to place the names nor the names of the district representatives because I want to focus on the issue at hand instead of the personalities involved,” he said.

But during last week’s deliberations, Lacson said an urban district in Davao got P15.351-billion allocation under the House-approved GAB.

Lacson also flagged 739 line items for multi-purpose buildings with a uniform allocation of P1 million each.

“If a P2-million project would only come up with a skeletal structure, can you imagine how a multi-purpose building with P1-million allocation would look?” he said.

Lacson had previously questioned “skeleton” infrastructure projects—which remain unfinished despite it receiving millions of funding in the past years—seeking additional funding under the 2021 budget.

One of the “skeleton” projects he earlier showed during the debates was a multi-purpose building in Pangasinan where P2 million was already allocated for in 2019 but only only vertical steel beams have been put up.