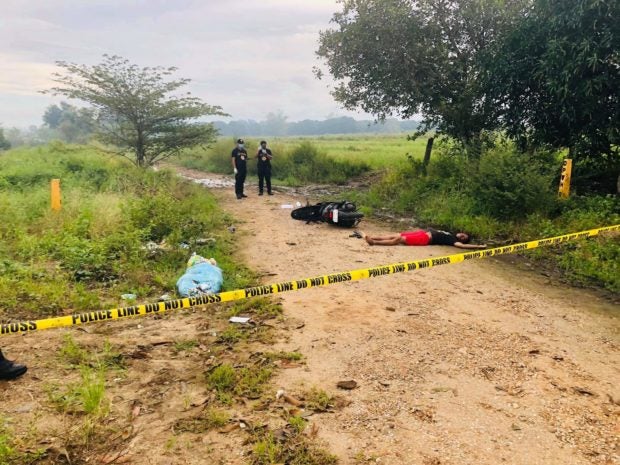 The bodies of two suspected motorcycle thieves lie on the road after a gunfight with police in San Rafael town, Bulacan. PHOTO FROM BULACAN POLICE

CAMP GENERAL ALEJO SANTOS, Bulacan—Four people have been killed in Bulacan during police anti-crime operations in the province which started on Tuesday (Nov. 17).

Col. Lawrence Cajipe, Bulacan police director, said drug suspect Almor Liwa clashed with policemen after he was caught selling shabu, or crystal meth, to an undercover agent around 2 a.m. on Wednesday (Nov. 18) at a village in the City of San Jose del Monte.

The two still unidentified suspects opened fire at policemen as they tried to elude arrest after being flagged down by law enforcers.

On Tuesday, one alias Onin was killed at a village in Bustos town during a buy-bust operation and after resisting arrest and shooting at policemen, who returned fire.

Onin was rushed to a hospital where he was pronounced dead.