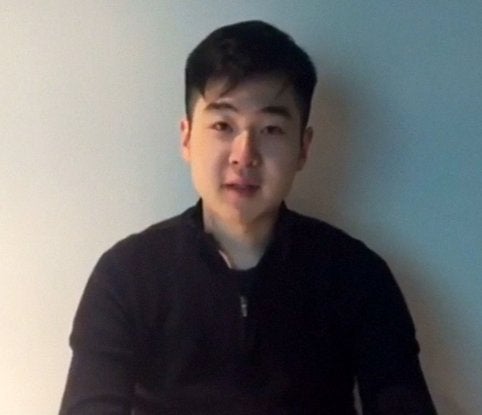 Kim Han-sol, a man believed to be Kim Jong-nam’s son, appears on YouTube. Screenshot captured from YouTube via The Korea Herald/Asia News Network

SEOUL — The US Central Intelligence Agency took the family of Kim Jong-nam, the half brother of North Korean leader Kim Jong-un, after Kim Jong-nam was murdered in February 2017, although it is unclear where the family resides now, said a Korean American writer.

The activist group that helped the bereaved family get out of Macau shortly after Kim Jong-nam was killed in Kuala Lumpur reportedly lost them to people who identified themselves as CIA officers at the Taipei airport.

According to Free Joseon, Kim Jong-nam’s son Han-sol called Hong for help because the Macau police who had been guarding his house disappeared after his father was killed by a nerve agent that two women smeared on his face at the Kuala Lumpur airport on Feb. 13, 2017.

According to Hong, Kim Han-sol first met with Hong in Paris around 2013 and told Hong he was aware of his work involving North Korea.

Kim Han-sol was wearing Gucci shoes at the time, and Hong said: “Never met a kid with so much money. Kim Jong-nam had stashed away a lot of cash during his life.”

Upon Kim Han-sol’s request for help, Hong called Christopher Ahn, a former US marine and member of Free Joseon, and asked him to meet Kim Han-sol, his mother and sister at the Taipei airport and “make sure no one is following them.”

Ahn, who was in Manila at the time, flew to Taipei, met with Kim Han-sol’s family and escorted them to an airport lounge with private rooms.

After some 18 hours at the airport, Hong called Ahn and said a country had agreed to take in Kim Han-sol’s family and that Hong had bought three plane tickets to Schiphol Airport in Amsterdam.

When the family proceeded to the gate to board the plane, however, the gate agent, upon checking their passports, said they couldn’t get on the plane.

Hours after Ahn and the family went back to the lounge, two men — a Korean American named Wes and an older white man — showed up, identifying themselves as CIA officers, according to Ahn.

Ahn told Kim Han-sol, “I don’t think you should talk to anybody until we understand what is going on.”

The next morning, airport agents came and helped Ahn book new tickets to Amsterdam. Wes had told Ahn that he would be accompanying the family on the flight.

Before they parted Ahn used his phone to film Kim Han-sol thanking him and Hong for ensuring his safety. They took a selfie together as an “insurance policy” to prove that Free Joseon was not kidnapping the North Korean leader’s nephew.

A team sent by Free Joseon, assisted by a Dutch human rights lawyer, was waiting at the gate at Schiphol, but the family never came through the gate.

According to Hong, Kim Han-sol called him to say that he’d tried to exit through the gate but had been taken through a side door to a hotel in the airport.

Hong asked Kim Han-sol if he wanted to seek asylum in the Netherlands and he said yes, so Hong told his team and the lawyer to go to the lobby of the hotel and wait for Kim Han-sol to come downstairs. But the North Korean leader’s nephew never showed up.

Suki Kim wrote that multiple sources told her the CIA had taken Kim Han-sol and his family elsewhere, although it is unclear whether they were taken to the Netherlands or another country.

She described her encounters with a number of Free Joseon members, including Hong and his associates, starting with the story of how Hong started LINK, a group to help North Koreans, in 2003 while he was a student at Yale.

Born in Tijuana in 1984, Hong grew up helping his father, a taekwondo master and missionary who founded an orphanage in Mexico.

Suki Kim profiles Hong and his co-workers based on her interviews and describes their activities until their “heist” at the North Korean Embassy in February 2019.

According to Hong, they entered the embassy upon request from a North Korean in the embassy who had asked for their help to defect, and they took some computers from the embassy. The FBI later took the computers for analysis and never returned them.

Hong, on the wanted list of the US Justice Department, has been in hiding since.

Suki Kim is the well-known author of the novel “Interpreter” and the memoir “Without You, There Is No Us: My Time With the Sons of North Korea’s Elite” about her time as an undercover journalist in Pyongyang.