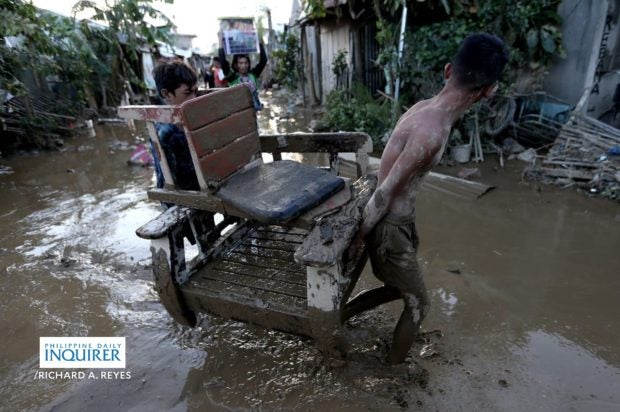 Residents wade through mud to salvage their belongings after their houses were submerged by flood waters in Southville Phase 1 K2, Barangay San Jose, Rodriguez, Rizal province on November 13, 2020 due to heavy rains brought by Typhoon Ulysses . RICHARD A. REYES / INQUIRER

Lawmakers in both houses of Congress on Tuesday pushed for an investigation into widespread flooding in Luzon that they believed was due to human activity and not just the effect of successive typhoons that hit the country in recent weeks.In the Senate, opposition Sen. Risa Hontiveros introduced a resolution for an inquiry into the severe flooding in Cagayan and Rizal provinces and in Marikina City amid reports that it was caused by illegal logging and land-grabbing.

“We hear of stories of tragedies yearly and our people are already exhausted and angry, and rightly so. Let’s find out what is really causing this vicious cycle, and change the story once and for all,” Hontiveros said.

In the House of Representatives, Bagong Henerasyon Rep. Bernadette Herrera-Dy filed two resolutions, the first of which cited the release of water from the Angat, Ipo, La Mesa, Ambuklao, Binga, San Roque and Magat dams as worsening the flooding in Metro Manila, Bulacan, Pangasinan, Benguet, Cagayan, Isabela, Rizal and other provinces in Luzon caused by Typhoons “Quinta” (international name: Molave) and “Rolly” (Goni), which swept across the island in late October and early November, and “Ulysses” (Vamco), which struck last week.

In her second resolution, Dy sought an inquiry into illegal logging and quarrying in the Marikina Watershed, a 126,125-hectare area above Metro Manila where commercial activities are banned.

In the Senate, Hontiveros, in introducing her resolution, said the government must study the gaps so that it could “create policy that truly prepares the country for future calamities.”

Sen. Francis Pangilinan asked whether better-controlled release of water from Magat Dam could have prevented what Isabela officials described as the worst flooding in the province in 45 years, or if sufficient warnings were given to residents in places hardest hit by the flood.

The senators called for an investigation as reports and images of the devastation caused by the flooding in the two provinces swamped the press and social media.

The Department of Agriculture said the three typhoons that hit the country one after the other caused P10.5 billion in damage to crops and farms, while the Department of Public Works and Highways placed the damage to infrastructure in eight regions at P8 billion.

In Metro Manila, the Marikina local government estimated the damage caused by Ulysses at P30 billion.

The National Disaster Risk Reduction and Management Council reported on Tuesday that the death toll from Ulysses had climbed to 73. Twenty-four of the fatalities were from Cagayan, 17 from Calabarzon, 10 from Cordillera Administrative Region, eight each from Metro Manila and Bicol region, and six from Central Luzon.

The council said 19 people remained missing and 24 others were injured. It warned that the numbers could rise as it vetted fresh casualty reports.

Hontiveros said illegal logging and land-grabbing had increased the vulnerability of the country’s natural resources to intense typhoons.

“The cries of our people sounded like they were abandoned in the pits of hell. The floods swept away the lives and livelihoods of millions without warning,” she said.

The devastation, she said, could have been prevented “if the alarm was rung loudly before they opened the dam.”

“The devastation of the floods is on us,” Hontiveros added.

Pangilinan said he was taking the cue from Vice President Leni Robredo, who toured flood damage in Cagayan and Isabela on Sunday.

The head of the National Irrigation Administration in 2014 and 2015, Pangilinan said there should have been guidelines involving several agencies for discharging water from dams.

Water release should have been coordinated with the weather service and the local governments, especially for early warning, Pangilinan said.

“Inspection and checkup of our existing warning stations and equipment should have also been carried out, and the warnings should have been through text messaging, radio, local TV broadcast—all means possible,” he added.

In the House, Dy noted that seven gates of Magat Dam were opened on Nov. 12, discharging 6,244 cubic meters of water per second.

“This irresponsible release of millions of cubic meters of water resulted in further aggravating the flash floods, leading to loss of life and millions [of pesos] in property damage,” she said.

Dy said it was apparent that the dam and the catch basin operators functioned independently and without coordination with the national disaster management council.

“The management of these dams and catch basins must be called to account for their actions to the fullest extent of the law. There is a need to conduct an investigation to determine the accountability of dam operators in the [calamity] that took the lives and livelihoods of many Filipinos,” she said.

In Marikina, she said, the lack of watersheds and catch basins, compounded by increasing and unabated illegal activities in the Marikina watershed, “all prove that immediate and swift action must be taken to better prepare the country for the repetitive yet strengthening onslaught of typhoons.”

There have been suggestions in recent days to involve the national disaster management council in the spilling of water from dams. Defense Secretary Delfin Lorenzana, chair of the council, said on Tuesday that he agreed with those suggestions and that he was studying the matter.

“I am for that suggestion since we can then direct dams to gradually release water even before the typhoon hits,” Lorenzana told reporters.

Lorenzana, however, said there were other matters that needed to be considered when releasing water from dams.

“Take Magat, for example. It is also a hydroelectric power plant, and the water runs in their generators,” Lorenzana said, adding that if the water level in the reservoir drops, the power generator will not run.

Civic organizations also called for an investigation of the release of water from Magat Dam, and for the government to speed up the delivery of aid to the thousands of people displaced by Ulysses.

In a joint statement, the groups also called on Congress to review the P4.5 trillion proposed budget for 2021 to make provisions for the “rehabilitation of communities in Bicol, Southern Tagalog, Marikina, Central Luzon and Cagayan Valley.”

They proposed that the P19 billion allocated for an anti-insurgency task force be realigned to funds for the rehabilitation of communities devastated by the recent typhoons.