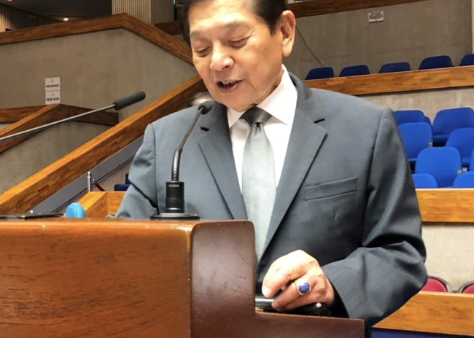 “We’d like to give our deepest condolences on behalf of the Senate on the passing of Congressman Raul del Mar,” Zubiri said.

The Senate then approved a motion to file a resolution honoring Del Mar and expressing the Senate’s “deepest sympathies and condolences” to the House lawmaker’s family.

Del Mar, who never lost an election since the 1980s, died in a hospital in Manila, where he had been attending the virtual sessions of the House of Representatives, said a statement from the Cebu Citizen’s Press Council (CCPC), whose executive director, Pachico Seares, was a close friend of the lawmaker.

The cause of death has yet to be revealed by Del Mar’s family.

“A son of a journalist and manager of a local newspaper for several years, he had the media workers’ welfare at heart, helping the collective effort of media and citizens to have a free but responsible press in Cebu and improve the craft of journalists,” CCPC’s statement read.

In a newspaper column published last Sunday, Del Mar’s friend and tri-media personality, Bobby Nalzaro, said the legislator was on his way to assuming the position of deputy speaker for the Visayas, when Congress resumed its session.

Del Mar, he said, held the same position from 2004 to 2010 under former House Speaker Jose de Venecia during the term of former President Gloria Macapagal-Arroyo.

He served as a congressman since 1987. When his first term expired in 1998, his son, Dr. Raoul “Ranny” del Mar, succeeded him for a single term.

Del Mar ran and won again and served a three-year term. When his term again expired, he was succeeded by daughter Rachel “Cutie” del Mar for one term.

Del Mar was a member of Bando Osmeña Pundok Kauswagan (BOPK), an affiliate of the Liberal Party.

“During his stints, he brought and introduced developments like infrastructures in his district. He built flyovers, which helped ease traffic congestion in the city intersections,” Nalzaro said.

“He provided free medical services to his district’s constituents through his “Del Mar Medical card” program and constructed extension buildings at the Vicente Sotto Memorial Medical Center. His medical assistance was even extended to members of the Cebu media through the Cebu Media Medical Aid program,” he added.

Del Mar also served as a member of the Commission on Appointments.

Nalzaro said the congressman sponsored three poverty alleviation bills to ease the economic burden of the underprivileged amid the coronavirus disease pandemic.