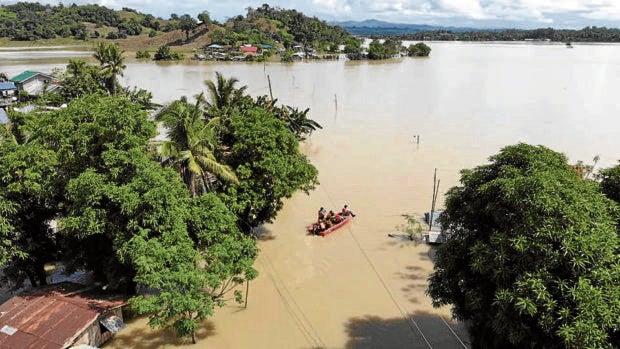 HIGH-RISK RESCUE Neighborhoods and farms at Barangay Malinta in Lasam, Cagayan, seem to be part of the Cagayan River after water overflowing from the waterway submerged these areas last week. The local government sent teams to heavily flooded villages to rescue trapped residents. —PHOTO COURTESY OF LASAM MDRRMO

The government has endorsed the dredging of the Cagayan and Bicol rivers following the deadly floods that hit Cagayan Valley region in northern Luzon and Bicol region in southern Luzon during the onslaught of successive typhoons this month.

On Monday, the Department of Environment and Natural Resources (DENR) said it had allowed the Cagayan provincial government to dredge the Cagayan River after Typhoon “Ulysses” (international name: Vamco) last week triggered widespread floods that devastated the province.

In a statement, Environment Secretary Roy Cimatu said he had approved the request of Gov. Manuel Mamba to dredge some 30 kilometers of Cagayan River, the longest river in the country that travels around 520 km.

According to the US National Oceanic and Atmospheric Administration, dredging involves the removal of debris, silt and other sediments from the bottom of bodies of water. This can increase the depth of navigation channels and reduce the contaminants in rivers, lakes and other water bodies.

Cimatu said the dredging project would check the bottleneck sites of the river called the “Magapit Narrows,” which meanders through the towns of Alcala, Lal-lo and Gattaran. These constricted areas hinder the flow of the floodwater to the Aparri Delta and toward the Babuyan Channel, he said.

At least 18 major rivers in the provinces of Quirino, Isabela, Nueva Vizcaya and the Cordillera region drain into Cagayan River, also known as the Rio Grande de Cagayan. Among its major tributaries is the Magat River, where the Magat Dam is located.

Cimatu said the proposed dredging would come “at no cost on the part of the government,” with the Cagayan government already seeking a contractor.

The DENR said the contractor would be allowed to sell the dredged minerals, from which the government would also earn revenues. Under DENR Administrative Order No. 2020-07, contractors will shoulder all expenses in exchange for whatever minerals they may recover, provided they pay the required national and local taxes.

Aside from the river dredging, Cimatu proposed the planting of some 200 million tree seedlings on low-lying agricultural areas.

Transportation Secretary Arthur Tugade, a native of Cagayan, said continuous dredging to increase the water carrying capacity of Cagayan River was integral in preventing deadly floods in the region.

“In meetings with transport officials, we noticed that there was a need for continuous dredging in Cagayan River to prevent flood from overflowing to Buntun Bridge … If we do not conduct this, then residents will repeatedly experience flooding,” he said during a meeting with President Duterte and other Cabinet officials on Sunday.

In Bicol, President Duterte on Sunday endorsed the request of officials of Camarines Sur province to dredge Bicol River to ease flooding in the region. 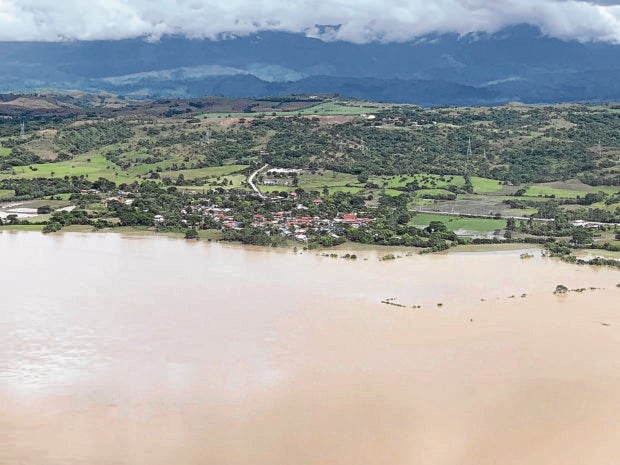 DRY LAND SHRINKS An aerial survey by the Philippine Air Force shows riverside settlements in the provinces of Isabela and Cagayan disappearing as water from Cagayan River rises. The government has recommended the dredging of sections of Cagayan River to ease flooding in Cagayan Valley region. —PHOTO COURTESY OF PHILIPPINE AIR FORCE

Gov. Miguel Villafuerte told the President and some Cabinet officials during a briefing on Sunday afternoon that a World Bank study had already recommended the dredging of the river.

Every time heavy rains pour in Camarines Norte and Albay provinces, he said, runoff water would reach Camarines Sur through Bicol River, setting off widespread flooding in the province.

“We would be glad to accommodate your proposal particularly based on a [World Bank study] … Submit your proposal in coordination with the appropriate agencies,” Mr. Duterte said.

Villafuerte said the project involved a 10- to 20-year implementation phase.

Bicol River, the eighth largest river in the country in terms of drainage basin size, has a catchment area of 3,779 square kilometers.

It drains a large part of the southwestern Bicol Peninsula and passes through Camarines Sur.

The river starts from Lake Bato and flows 94 km downstream toward San Miguel Bay, passing through Naga City. It connects to the Libmanan, Sipocot, Naga and Yabu rivers.