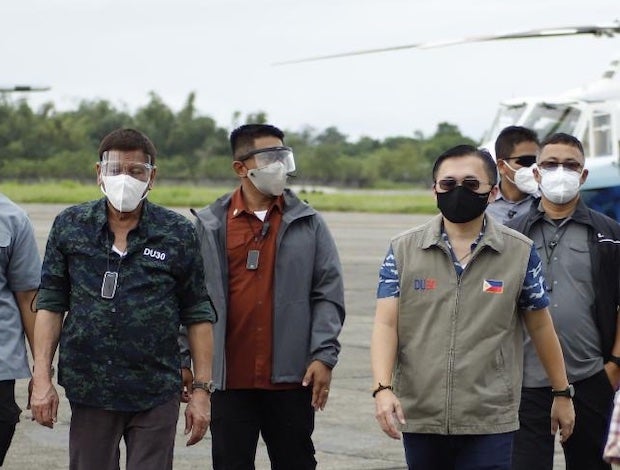 MANILA, Philippines — Sen. Christopher “Bong” Go welcomes the recent announcement of President Rodrigo Duterte of the creation of an inter-agency task force to fast-track the recovery and rehabilitation of areas affected by the recent series of typhoons.

In a statement issued on Monday, Go reassured the public that a whole-of-government approach is underway to take care of the needs of typhoon survivors and see to it that normalcy would be restored as soon as possible in the typhoon-stricken areas.

Meanwhile, the military and other uniformed government personnel continued with search and rescue operations for typhoon survivors.

“All agencies are ready to help all those affected and will continue to give them food, water, medicine, and other relief assistance, including financial aid,” he said in Filipino. “Efforts are being made to restore electricity, communications, and water in affected areas.”

“You can rely on us to do everything we can to help you recover from this trial,” he added. “Your government will not let you down and will always serve you. Let’s do bayanihan.”

A day before, Sunday, Go joined the President in an aerial inspection of typhoon-hit areas, such as the towns of Enrile, Iguig, and Solana in Cagayan province. The President also talked briefly with affected residents, and there was a briefing with national and local officials in Tuguegarao City.

Later in the day, Duterte and Go went to Camarines Sur for an aerial inspection of Minalabac and Bula towns and a briefing at the provincial capitol with key Cabinet members and local officials.

“My office continues to give additional help to our affected countrymen, especially those who need medical assistance,” Go said.

‘All hands on deck’

The Philippines has been battered with a series of typhoons in just two months on top of the crisis caused by COVID-19 pandemic.

But throughout these crises, Go said that the government had shown that it was on top of the situation.

“Our government is all hands on deck. The President is in charge and took part in the planning and preparation process,” Go said.

“We registered fewer deaths, evacuated more people, forewarned a significant number of the population and maintained safety, security, and orderliness in communities compared to similar calamities in the past,” he added, explaining that government efforts keep improving in terms of disaster preparedness and response.

Go stressed, however, that the government should do more.

“Aside from providing help, we must also ensure that everything we do is synchronized, coordinated, and done well,” he said. “I cannot stress this enough: Government must move as one to ensure that the delivery of assistance is timely, effective, and responsive.”

He recognized the crucial role played by the National Disaster Risk Reduction and Management Council (NDRRMC) during disasters.

But he said the NDRRMC would need help in implementing and monitoring post-disaster recovery.

“This is where the task force on recovery and rehab will come in,” he said. “This has a clear mandate and capacity to implement programs until our countrymen can get up again. This will not stop until the job is finished.”

In the long term, however, the country would need to create a Department of Disaster Resilience (DDR) to handle all these responsibilities.

He thus repeated his call to his colleagues in the Senate to pass the measure he filed last year — Senate Bill No. 205, or the Disaster Resilience Act of 2019, which would create the department.

“If my fellow legislators have reservations about this, let’s talk about this in the Senate,” he said. “We’re all willing to listen and work together to come up with a solution to all this. What’s important is that we act without delay because what’s at stake are the lives of Filipinos.”

Meanwhile, he appealed to the executive department to augment the calamity funds of local government units, especially those trying to control the spread of COVID-19 as they struggled to recover from other calamities.