Recto hits shortfall in spending after only half of P165.5B Bayanihan 2 budget was released | Inquirer News
Close
menu
search

Recto hits shortfall in spending after only half of P165.5B Bayanihan 2 budget was released 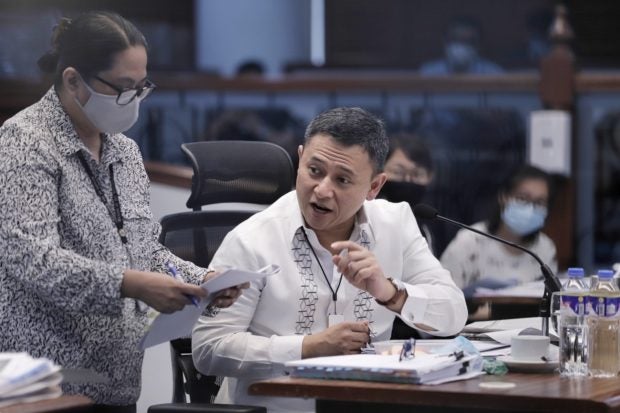 Sen. Sonny Angara, chairman of the Committee on Finance, consults with the staff of the Legislative Budget Research and Monitoring Office (LBRMO) on the proposed budgets of certain departments during the marathon hybrid plenary session Monday, November 16, 2020, on the proposed P4.506 trillion national budget for next year. Joseph Vidal/Senate PRIB

MANILA, Philippines — Only P82.4 billion or nearly half of the total funding under the Bayanihan to Recover as One Act has so far been released, an amount one senator said shows a “shortfall” in government spending.

Senate President Pro Tempore Ralph Recto pointed out during his interpellation of the proposed P4.5 trillion national budget for 2021, sponsored by Senator Sonny Angara, who is also chair of the Senate finance committee, that the amount released is only below half of the total 165.5 billion allotted for the program.

“So far, only P82.4 [billion] has approximately been released as of today,” said Angara.

“So even with regards to Bayanihan 2, there’s still a shortfall in spending,” Recto said.

Prior to this, Recto pointed out the low spending level of government amid the emergency situation.

“There’s an admission earlier [from National Economic and Development Authority Secretary Karl Chua] that we could have done much better in terms of spending so that the economy would not have contracted by that much in the third quarter,” he added.

Recto then pushed for his bill seeking to extend the validity of the Bayanihan 2 until March 2021. The law is set to expire on December 19 this year.

“I would agree that it’s needed,” Angara said, referring to the extension of the validity of the Bayanihan 2.

Of the amount, P140 billion is being taken from regular appropriations while the remaining P25.5 billion will come from standby funds.