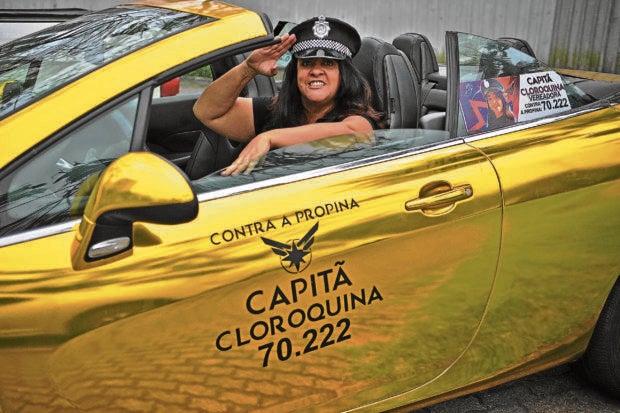 GETTING VOTERS’ ATTENTION Lawyer Regina Bento Sequeira, 59, who is seeking a city council seat in Rio de Janeiro, has a plan to achieve victory, reinventing herself as a superhero. —AFP

SAO PAULO — After losing eight elections, Regina Bento Sequeira came up with a plan to win a city council seat in Brazil: She reinvented herself as a superhero, “Captain Chloroquine.”

The name—which will actually appear on the ballot for the country’s local elections on Sunday—is a nod to her political idol, far-right President Jair Bolsonaro, who hails chloroquine as a wonder drug against COVID-19 despite a slate of studies finding it ineffective.

pseudonyms like Sequeira’s, a phenomenon that has exploded despite complaints from critics that it detracts from serious politics.

To Sequeira, it is the only way candidates like her — regular Brazilians without deep pockets — can hope to get voters’ attention.

She has been crisscrossing Rio de Janeiro in a metallic yellow convertible emblazoned with the nickname and handing out flyers with a picture of herself decked out in a Captain Marvel outfit, asking voters to choose her for city council to fight both COVID-19 and corruption.

“It’s the only way to make my mark. I don’t work in politics, I don’t have support, I don’t have money. That’s why I chose this path,” says Sequeira, 59, who is a lawyer in her day job.

But she says she has no illusions about her chances.

“Are you joking?” she says when asked who she thinks will win. “The same ones as always!”

“Because there are a lot of candidates, people try to use names that stand out,” says Natalia Aguiar, a political scientist at the Federal University of Minas Gerais.

“The phenomenon of irreverent names could be seen as a symptom of a deeper problem: We overvalue individual candidates at the expense of party politics,” she told Agence France-Presse (AFP).

Get out the vote

Sequeira first ran for public office in 2004. She has tried a series of pseudonyms over the years, many of them drawn from her real nickname, Zefa.

In 2016, the year the augmented reality game Pokemon Go came out, she was “PokeZefa.” In 2010, she was “Zefa White, fighting the budget dwarves.”

In 2008, she was “Cave Zefa,” with a Flintstones-inspired logo, criticizing what she called the Stone Age level of development in her hometown, Sao Joao de Meriti.

“Chloroquine was the hot topic of the day” during candidate registration, she said. “Everyone was talking about chloroquine, whether negatively or positively. That’s exactly what I wanted.”

Political communication specialist Janaine Aires sees the trend as an extension of Brazil’s culture of nicknames.

“It’s a characteristic of Brazilian culture: We try to have a certain proximity to our interlocutors,” says Aires, a professor at Federal University of Rio Grande do Norte.

Pseudonymous candidates all hope to mimic the legendary success of Tiririca (Grumpy), a clown elected to Congress in 2010 with the most votes nationwide after running on the slogan, “It can’t get any worse.” He has since been reelected twice.

But political analysts say it does not always work.