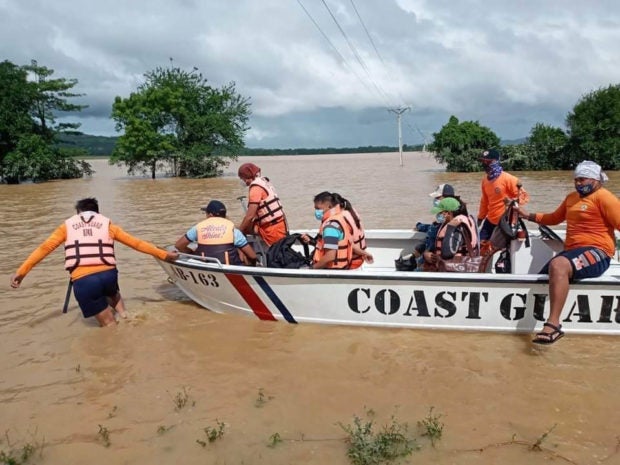 The death toll from the deadliest typhoon to hit the Philippines this year has risen to 69, with 12 people still missing, while many areas remain submerged in Cagayan province, in the northern region worst hit by flooding in 45 years, officials said on Sunday.

President Duterte flew to Tuguegarao City on Sunday afternoon to assess the situation in Cagayan Valley, which was heavily flooded after Typhoon “Ulysses” (international name: Vamco) dumped heavy rain over swaths of Luzon, including Metro Manila, on Thursday.

He also flew to Pili, Camarines Sur province, to receive briefings from Cabinet officials on damage caused by Ulysses and the earlier Typhoon “Rolly” (Goni) in the Bicol region.

Twenty-four people were reported dead in Cagayan, 17 in Calabarzon, 10 in the Cordillera Autonomous Region, eight each in Metro Manila and Bicol, and two in Central Luzon.

Among the dead was a 3-year-old boy whose body was recovered along with those of three adults on Saturday from a house in Benguet province that was hit by a landslide at the height of Ulysses.

Two engineers, a laborer and a driver from the Department of Public Works and Highways in Ifugao province were also killed in the landslide.

Public Works Secretary Mark Villar said the four men were part of a quick-response team that was deployed to clear landslides on the Nueva Vizcaya-Ifugao-Mountain Province Road. They were sheltering in a house during heavy rain when the landslide swept away the house.

A fifth member of the team was unharmed, Villar said.

“My thoughts and prayers go out to our personnel who bravely served our country and paid the ultimate price. We will extend all efforts to look for the missing and support the families of the victims,” he said.

The National Disaster Risk Reduction and Management Council reported that 12 people were missing in Calabarzon, Bicol and Metro Manila.

“This is the worst flooding that we had in the last 45 years,” Cagayan Gov. Manuel Mamba said during a briefing with President Duterte. “We see that it is worsening every year.”

The accumulated effects of weather disturbances and huge volumes of water released from Magat Dam in Isabela displaced thousands of families in the province and Cagayan, some of whom had fled to rooftops to escape two-story-high floods.

Six cyclones hit the country in a span of just four weeks, including Ulysses and Rolly, the world’s most powerful this year.

Mamba also lamented about denuded forests in Cagayan, prompting President Duterte to order him to curb logging in the province.

“We always talk about illegal logging and mining but nothing has been done about it,” Mr. Duterte said.

In a message during his visit, he expressed solidarity with the residents of Cagayan and extended his condolences to the families of those who perished in the storm.

“I want to personally assure our fellowmen here that the government will continue its rescue operations until all families are saved, all casualties and mission persons have been accounted for, and all affected individuals and communities have received their needed relief and other assistance,” the President said.

“Rest assured that we are working hard to rebuild your lives after these calamities. We know your anguish and we will respond with urgency. With the bayanihan spirit of the Filipino, I am confident that together we will brave all the challenges ahead and emerge stronger as a [people],” he said.

He thanked the police, military, coast guard, local governments and private organizations for banding together to mount rescue and relief efforts.

He told local officials to work hard to restore normality in the ravaged areas, and to give priority to people who needed food and water, as well as those who still had no electricity.

The President attributed the disaster to climate change.

Relief and rescue operations continued in Cagayan. In Isabela, Magat Dam went on discharging water, two days after releasing a volume equivalent to two Olympic-size pools per second, based on government data.

The Philippine Coast Guard and the Armed Forces of the Philippines on Sunday shifted from rescue to relief operations in Cagayan and Bicol.

The Coast Guard said it sent two teams from its northern Luzon district to help the local governments of Alcala and Amulung towns in Cagayan transport relief supplies for families displaced by the flooding in the region.

Various groups and individuals contributed to the relief effort for Cagayan, and the Ilocos regional police deployed officers to help in search and rescue operations.

Raul Lambino, presidential adviser for north Luzon, took a plane from the Binalonan airstrip in Pangasinan on Sunday to bring relief goods to Cagayan and Isabela.

In Pampanga, Mayor Carmelo Lazatin of Angeles City sent food for 4,000 families in Cagayan and Isabela. He called on Angeles residents to contribute to the relief effort by donating rice, groceries and money through the city’s social welfare office.

Timbal of the national disaster agency initially placed damage to agriculture due to flood at P1.2 billion and to infrastructure, P470 million.

Typhoon-weary residents of Luzon can rest easy this week, with no weather disturbance seen coming in the next days, the state weather service said on Sunday.

But residents in northern Luzon, including Cagayan Valley, should be ready for rain brought by the northeast monsoon, the Philippine Atmospheric, Geophysical and Astronomical Services Administration (Pagasa) said.

Weather forecasters, however, said the country could experience generally fairer weather this week.