In Australia, a free supermarket feeds 2,000 foreign students a week 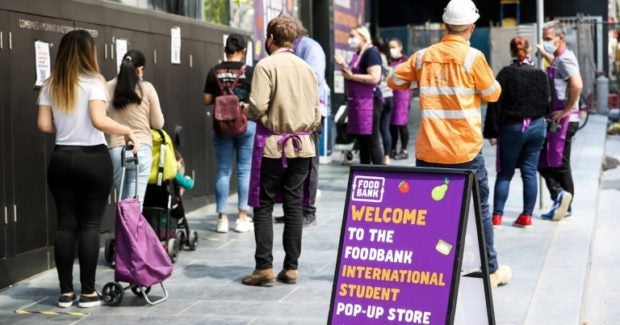 In Melbourne, Australia, a Foodbank pop-up store allows foreign students in need to survive despite the pandemic. This initiative, launched by Foodbank Australia is exclusively for foreign students who are hurting financially, due to the lack of jobs in these troubled times.

Over 100,000 foreign students were stuck in Melbourne after borders were shut because of the COVID-19 pandemic, reports Australian publication The Age. With no government support and student jobs lacking, several of them have found themselves in situations nearing poverty. To help the most needy students, Foodbank Australia launched its first free store reserved to students in October, with the support of Victorian authorities in Melbourne.

In the first week after launch, this charity store welcomed about 2000 students, noted The Age. On Nov. 9, 400 students had walked through its doors over a day, according to the Foodbank Victoria Facebook page.

Foodbank Australia notes that 39% of its charity food stores saw an increase of foreign students with the onset of the new coronavirus pandemic. This NGO offers fresh food, like fruit and vegetables, as well as frozen products and basic items such as flour and sugar. This pop-up store was installed in a spacious warehouse, where strict health measures are in place as well as social distancing.

This free supermarket is open on Mondays, Wednesdays and Fridays, while remaining closed on holidays. It only welcomes foreign students, who have to show their student ID upon entrance. It will remain open in Melbourne until the end of the year.

The report notes that foreign students contributed 32 billion dollars to the Australian economy in 2017 to 2018. “The university sector especially relies on the money that international students bring into the sector, so it’s really unfair they’re being treated like that,” said Hannah Buchan, University of Melbourne student union president.

Many local, grassroots organizations around the world are mobilizing to facilitate providing food to those in need. Networks of community fridges or ‘freedges,’ where individuals can leave what they don’t need and take what they do, have cropped up in Ontario, Canada, Los Angeles and New York among other places. In Singapore, a group of friends set up a free food pantry on the street. And a bakery in Boulogne-Billancourt, close to Paris is giving away free food on a shelf.

“If you’re having trouble to make ends meet… Help yourselves without asking…. And if you can, you can drop off something to help others,” reads a photograph shared by its owner Daniel Franco on Twitter.