Floodwater filled a residential area in Pakil, Laguna on Friday, Nov. 13 — but what caught people’s attention was that the water was unusually clear.

Barangay Burgos in Pakil town was left submerged in clean surface water, with no visible trash floating on the streets, a few days after Typhoon Ulysses dumped heavy rain across Luzon this week.

Photos of the flooded walkways were shared in a Facebook post on Friday, Nov. 13, by Lorraine Marley Antazo, a resident of the barangay.

Antazo told INQUIRER.net this is not the first time that clean floodwater emerged in their area, given that the nearby river’s water is naturally clean. She recalled witnessing the same occurrence when their barangay was flooded with clean waters after a heavy downpour back in 2012.

“Nililinis po iyan ng [mga kababaihan] dito [sa aming lugar] weekly or monthly,” Antazo said as she talked about factors behind the aquamarine floodwater. She also shared with INQUIRER.net photos of the river cleaning operations done by a group of women in their barangay, which show fishes swimming freely in clean waters. 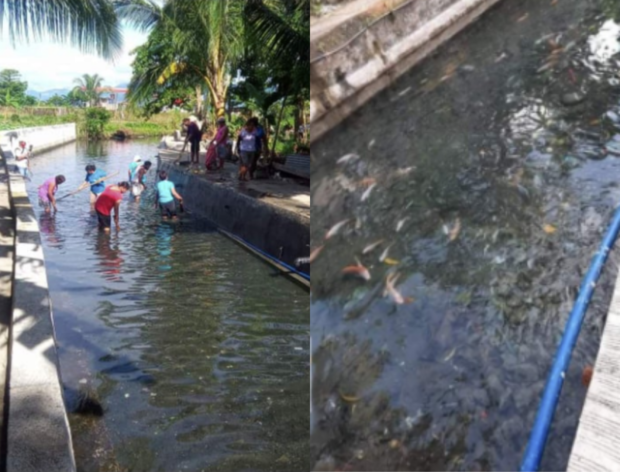 River cleaning operations are done by a group of women in Barangay Burgos, Pakil, Laguna, where fishes can be seen swimming freely in clean waters. Image: courtesy of Lorraine Marley Antazo

Pakil Municipal Mayor Vince Soriano explained in a Facebook post that Antazo’s photos were taken from the nearby river he referred to as “Malaking Ilog” (Big River), where the flowing water is naturally clean as it comes directly from the Turumba Spring Resort and is also declared as the town’s “fish sanctuary.”

Mayor Soriano informed residents that large fish that have been washed up from the river to the paddy fields can be fished, but those who will catch fish directly from the river will be fined, as per orders of Barangay Captain Manny Laciste.

Read Next
DILG to Cagayan gov’t: Relax health restrictions on rescuers, journalists
EDITORS' PICK
On Day 2 of implementation, gov’t says workers now exempt from ‘no vax, no ride’ policy
Over 3 Million worth of prizes to be won at Smart Padala’s SENDali Manalo Promo!
Acer starts the year off strong with the Aspire Vero National Geographic Edition
Gear up and get ready to play with Yamaha Mio Gear
Metro Manila posts lowest temperature yet this ‘amihan’ season at 19°C
DOH: 28,471 new COVID-19 cases in PH; active cases now 284,458
MOST READ
Cold-case investigation names surprise suspect in Anne Frank’s betrayal
Czech anti-vax singer dies after deliberate infection
Derek Ramsay on being married to Ellen Adarna: ‘Gumaan ‘yung mundo ko’
Emma Stone calls Andrew Garfield a ‘jerk’ after he ‘lied’ about his ‘Spider-Man: No Way Home’ appearance
Don't miss out on the latest news and information.