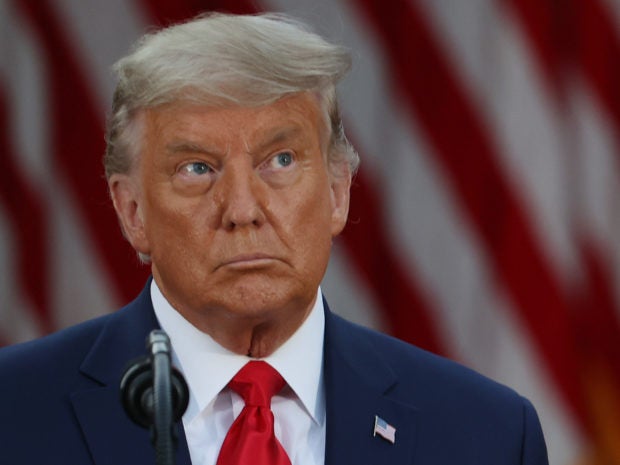 WASHINGTON, DC – NOVEMBER 13: U.S. President Donald Trump speaks about Operation Warp Speed in the Rose Garden at the White House on November 13, 2020 in Washington, DC. The is the first time President Trump has spoken since election night last week, as COVID-19 infections surge in the United States. Tasos Katopodis/Getty Images/AFP

WASHINGTON – President Donald Trump will make his first public comments since his election defeat with a White House address later Friday on US plans for a vaccine against the resurgent COVID-19 virus.

A spokesman announced the remarks in the Rose Garden at 4:00 pm (2100 GMT) as an “update” on Operation Warp Speed, the government partnership with pharmaceutical companies to develop and distribute a vaccine.

The briefing comes in the wake of Democrat Joe Biden solidifying his election win with a final tally of 306 votes in the state-by-state Electoral College that decides the presidency, against 232 for Trump.

Trump won by the same margin in 2016 against Hillary Clinton, and has repeatedly referred to his own 306-vote victory as a “landslide.”

It was not clear whether the outgoing president would take questions or discuss his refusal to concede defeat.

He has not had a press conference since last week’s election and the last time he addressed the nation was November 5, when he falsely claimed to have won.

Trump has spent the last 10 days consumed by his pursuit of a conspiracy theory that Biden was declared winner only through massive ballot rigging.

Despite his own intelligence officials’ declaration Thursday that the election was “the most secure in American history,” Trump and his right-wing media allies show no sign of giving up their crusade.

On Friday, Trump tweeted thanks to supporters backing his claim that the “Election was Rigged” and said he might “stop by and say hello” at a rally planned in Washington on Saturday.

Earlier Friday, Trump attended a briefing in the Oval Office on the vaccine search — one of the first times he has conducted official business since the election.

Throughout the post-election period, Trump has been absent from his normal presidential duties and notably silent about dramatically soaring coronavirus infection rates around the country and steadily rising deaths.

Despite a healthy majority of ballots tallied for Biden and days of failed attempts by Trump lawyers to present proof of significant irregularities, White House trade advisor Peter Navarro told Fox Business on Friday that his side remained convinced of victory.

“We think he won that election,” he said. “We are moving forward here at the White House under the assumption that there will be a second Trump term.”

Biden, meanwhile, is steadily preparing to take over on January 20 and the list of world leaders accepting that he will be the new president keeps lengthening.

China was the latest nation on board, with a foreign ministry spokesman saying “we express our congratulations.”

Klain highlighted the inability to join in on preparations for rolling out the Covid vaccine in “February and March when Joe Biden will be president.”

“The sooner we can get our transition experts into meetings with the folks who are planning the vaccination campaign the more seamless,” he said.

Top Republicans remain outwardly loyal to Trump, but there appears to be widening discomfort within the party over the blocking of Biden’s transition team.

Senator James Lankford told Tulsa Radio KRMG earlier this week that he was giving Trump until Friday to allow Biden access to the daily presidential intelligence briefing or “I will step in.”

John Bolton, a former national security advisor under Trump and a popular figure on the hawkish foreign policy wing of the Republican Party, said his side has to “acknowledge the reality that Biden is the president-elect.”

“They may not like it but the country deserves to give him the preparation he needs,” he told NPR radio Friday.

Since the election, Trump has only left the White House to play golf twice and to attend a brief Veterans’ Day ceremony at Arlington National Cemetery.