BAGUIO CITY — A cartoon portraying soldiers as drunkards and gamblers that is used in a social studies textbook for pupils in the Cordillera has gotten the ire of the military, prompting school officials here to apologize and recall the book’s distribution.

Found on one of the pages of “Araling Panlipunan 2”, the cartoon depicts a daycare center and a school manned by soldiers in a drinking binge. It was supposed to be an illustration for a lesson for Grade 2 pupils asking them to identify communities that are not functioning properly.

“But I did not realize that the drunks in the cartoon were labeled,” said Carolyn Verano, schools division superintendent of Baguio City, referring to the figures in the drawing that are wearing t-shirts marked “Army” and “9th ID” (apparently referring to the Army’s 9th Infantry Division).

One of the drinkers is in a sleeveless undershirt marked “AFP” (for Armed Forces of the Philippines). Another soldier, in combat uniform, is pointing an assault rifle at a man, while another trooper is running off with a live chicken. 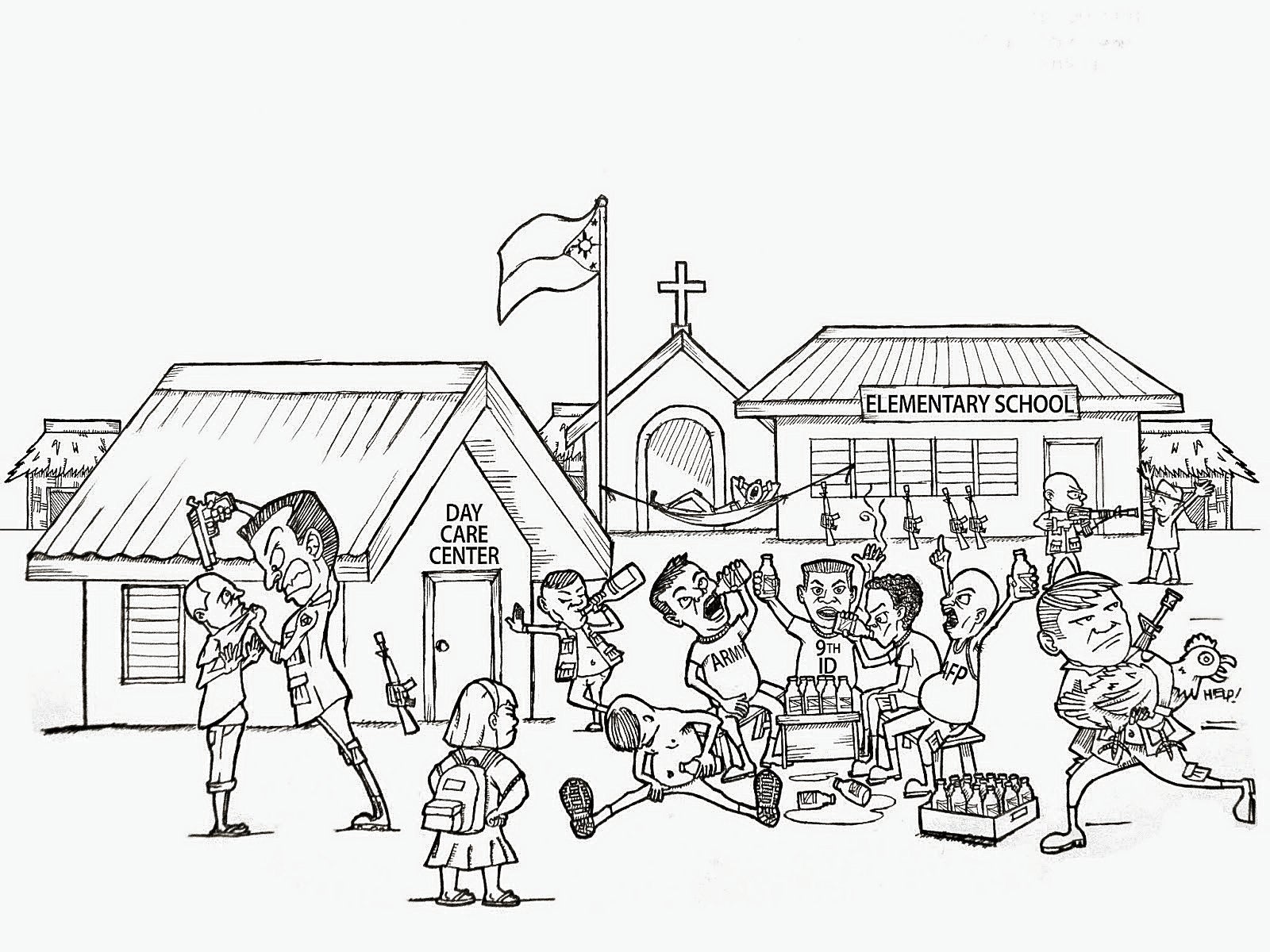 ‘WRONG PERSPECTIVE’ The military has called the attention of the Department of Education, which has disowned this cartoon found in the textbook “Araling Panlipunan 2,” depicting soldiers as rogue elements harassing a community.

The Department of Education (DepEd) has disowned the learning material, saying it does not condone the cartoon’s depiction of the soldiers.

“The cartoon violated our social content standard by issuing the wrong perspective about the role our soldiers play in maintaining peace and order in the community,” DepEd said in a statement on Wednesday.

The department said the book was not scrutinized by the regional office and that the caricature was lifted from the internet by a teacher tasked to “localize” modules being studied by pupils online.

An investigation traced the cartoon to an underground communist publication, according to a principal who asked not to be identified.

But Verano assured the Armed Forces of the Philippines that the cartoon was not maliciously included in the book to “sabotage” the military.

Officers and soldiers who alerted Verano about the drawing were worried that the DepEd had been infiltrated by the communist insurgents, she said.

The military under the Duterte administration has been criticized for “Red-tagging” not just activists but also celebrities to organizations perceived as fronts of the communist movement, including party list groups that have won seats in the House of Representatives.

The module was part of the textbooks which were introduced in July in Baguio schools, and “no one had noticed the drawings,” Verano said. “We have no person-to-person contact anymore and all these [materials] are [just] screened online. I did not see the labels.”

According to the DepEd official, the military helped distribute the controversial module to 35 of the 45 public elementary schools here.

Verano said no pupil appeared to have been influenced by the cartoon. “I have read through their answers, and the pupils marked this drawing as an example of a bad community,” she said.

Verano said she and the teacher involved in adapting the module had issued an apology to AFP.

“I wish they would forgive us. It was an honest mistake,” Verano said.