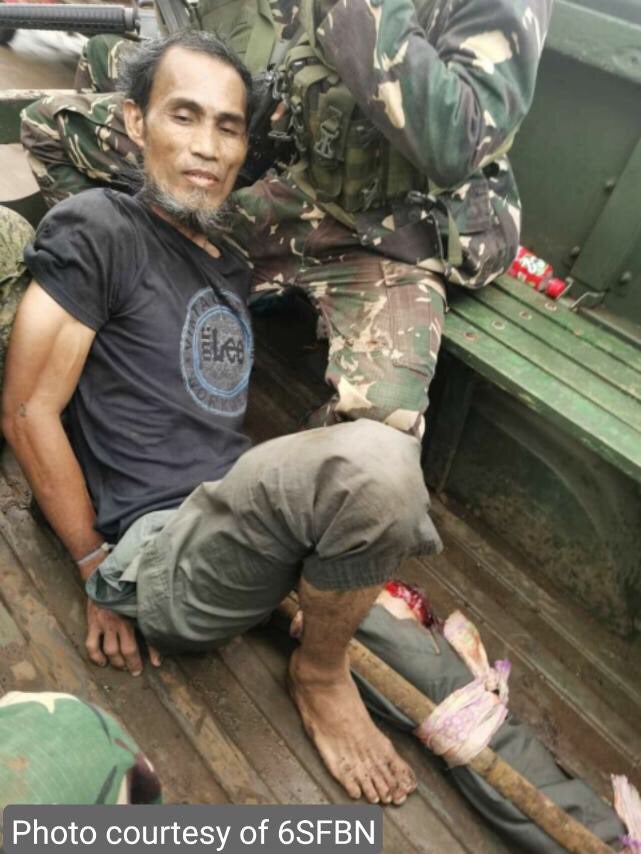 Amah Ullah, one of the leaders of Abu Sayyaf in the group’s lair in Sulu, is brought to hospital after being wounded in clash with soldiers. PHOTO FROM 6TH SPECIAL FORCES BATTALION

ZAMBOANGA CITY—A leader of Abu Sayyaf was captured on Thursday (Nov. 12) after a clash with government soldiers in Sulu province, where the homegrown terror group is known to have a lair.

Lt. Gen. Corleto Vinluan Jr., head of the Western Mindanao Command, said Amah Ullah was arrested following the clash at the village of Latih in Patikul. He is uncle and adviser of Basaron Arok, one of the lower-level leaders of Abu Sayyaf.

Lt. Col. Rafael Caido, head of the Army’s 6th Special Forces Battalion, said Ullah was wounded in the leg and unable to flee.

Ullah, according to Caido, was determined to fight and shouting at soldiers to finish him off.

Caido said Ullah would be given debriefing while recovering at the hospital.

Vinluan said the Ullah that soldiers captured was not related to Roland Ullah, a cook and dive instructor in Sipadan, Malaysia, who had been kidnapped and freed in 2003.

Read Next
Children of Mexican ex-drug lord El Chapo build makeshift school for poor
EDITORS' PICK
New Year, New Rediscoveries
Acer Philippines welcomes you to its first flagship store
Is your company a growth champion? Stand up and be recognized!
4 senators want military, cops off UP campuses
PUP accord with DND also faces termination
Joe Biden sworn in as 46th U.S. president, urges end to ‘uncivil war’
MOST READ
Biden says Trump wrote him ‘very generous letter’
A shade at Roque? Vice asserts being a comedian, not a clown
Trump’s parting gifts to Biden: Roaring stocks, a weaker dollar, tons of debt
Graft complaint filed vs Diokno, other BSP execs for P1.75-B contract for IDs
Don't miss out on the latest news and information.