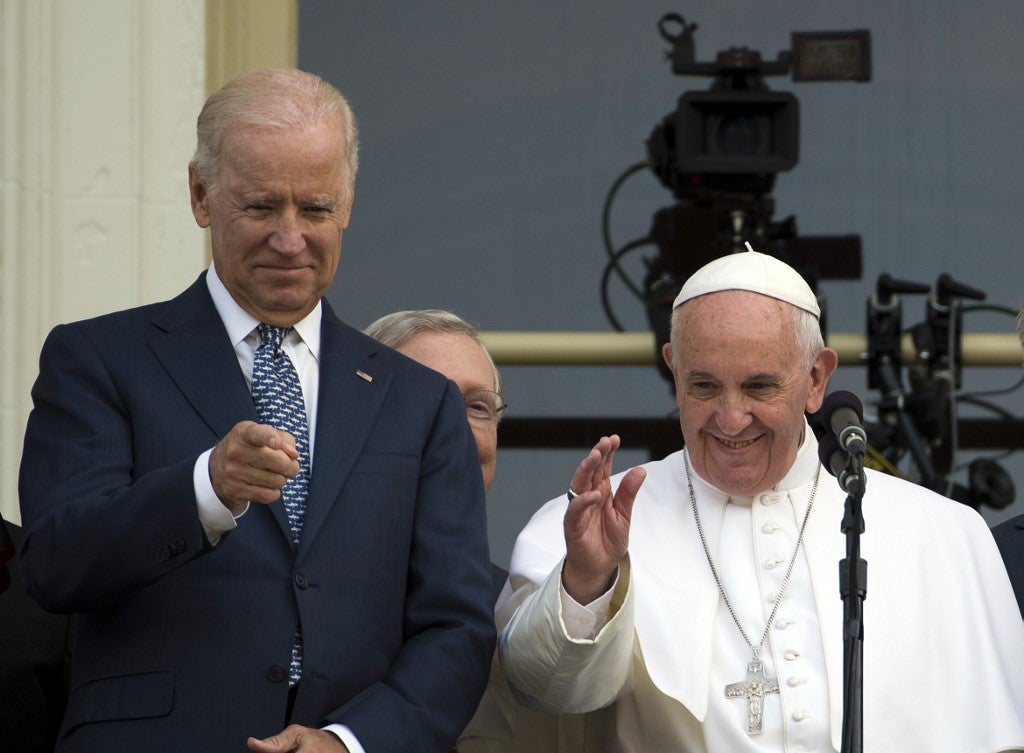 (FILES) In this file photo taken on September 24, 2015, Pope Francis waves, next to US Vice President Joe Biden, from a balcony at the US Capitola balcony after speaking to a joint-session of the US Congress, in Washington, DC.  (Photo by Andrew CABALLERO-REYNOLDS / AFP)

Pope Francis spoke with Joe Biden by telephone Thursday to offer “blessings and congratulations” to the US president-elect on his victory, the Democrat’s transition team said in a statement.

Former vice president Biden, 77, is only the second Catholic elected to the US presidency, after John F Kennedy in 1960.

“The president-elect thanked His Holiness for extending blessings and congratulations and noted his appreciation for His Holiness’ leadership in promoting peace, reconciliation, and the common bonds of humanity around the world,” according to a readout of the call provided by Biden’s office.

Biden “expressed his desire to work together on the basis of a shared belief in the dignity and equality of all humankind on issues such as caring for the marginalized and the poor, addressing the crisis of climate change, and welcoming and integrating immigrants and refugees into our communities.”

During a bitter 2020 campaign against President Donald Trump, Biden quoted Pope John Paul II, frequently invoked his Irish Catholic roots and pledged to “restore the soul of America” after four years of acrimony.

He also regularly carried a rosary that belonged to his late son Beau Biden.

Pope Francis himself has had strained relations with Trump. In early 2019 he called Trump’s wall project on the US-Mexico border “madness.”

Back when Trump was seeking the Republican nomination, in February 2016, the Pope made waves when he said during a visit to Mexico that someone who thinks about building walls instead of bridges “is not Christian.”

Trump fired back in a stinging statement at the time, saying: “For a religious leader to question a person’s faith is disgraceful.”

In 2015 the Pope met with then-vice president Biden in Washington when Francis delivered a speech in the US Capitol to a joint meeting of Congress.