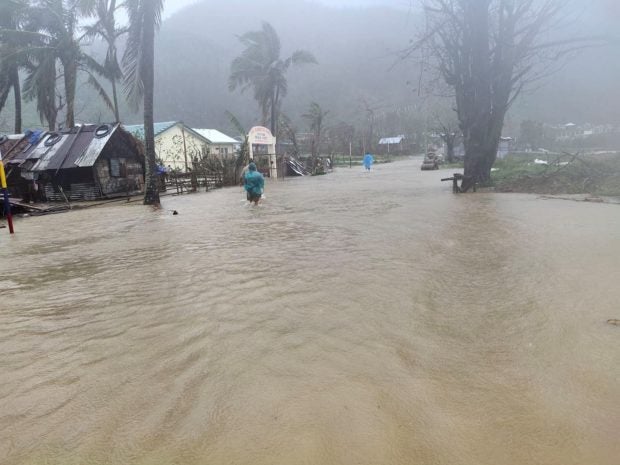 LEGAZPI CITY—Five persons, including a four year old boy died when Typhoon Ulysses battered the Bicol region, according to the Office of Civil Defense (OCD).

The boy, identified as John Lyndon Candelaria, died due to a landslide in Labo, Camarines Norte, the report said.

In the same municipality, Federico Taroza, 47, died due to drowning.

In Camarines Sur, Goa resident Johnny Miraña’s body was found off the coast of the neighboring town San Jose.

Miraña reportedly tried to save his goat from rising floodwaters.

The OCD previously reported two fatalities in Camarines Norte —  Avelino Cabaneta, 68, a resident of the coastal village of Bagasbas in Daet, who died while repairing his roof; and Salva Mangubat, 70, a resident of Gabon village in Talisay, who slipped while trying to get up from her bed at the height of the typhoon on Wednesday.

Of the 12 towns in Camarines Norte, 10 recorded incidents of flooding. In Camarines Sur, 23 towns and the cities of Naga and Iriga, also recorded flooding.

Read Next
Ulysses weakens into severe tropical storm, to exit PAR Friday morning
EDITORS' PICK
Every Filipino home can now be a smart home with realme TechLife
LTO’s P500-M deal for screws draws scrutiny
How to lose a PH genius: Wesley So officially a US citizen
New 3,045 COVID-19 cases push PH total active cases to 40,074
Smart reinforces superiority with best speed and mobile video experience in PH
Nestlé Philippines’ ‘NESCAFÉ Plan’ bags Grand Anvil at PRSP 56th Anvil Awards
MOST READ
US lays out list of aid to ‘satisfy’ Duterte following VFA payment demand
Robredo on Sara Duterte leading poll surveys: Why are Filipinos drawn to leadership of this kind?
How to lose a Filipino genius: Wesley So officially a US citizen
LTO’s P500-M deal for screws draws scrutiny
Don't miss out on the latest news and information.