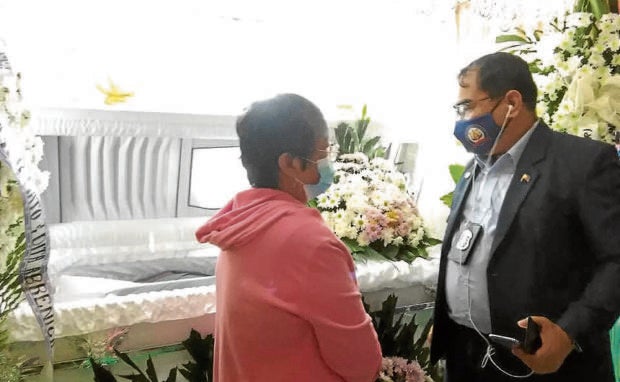 DAGUPAN CITY, Pangasinan, Philippines — A police task force has been formed to look into the murder of a local radioman on Tuesday in Villasis town, Pangasinan province, and work for the “speedy resolution” of the case.

Virgilio “Vir” Maganes, 62, a block-time radio anchor and local newspaper columnist, was shot and killed by two men on a motorcycle at 6:45 a.m. while entering his residential compound in Barangay San Blas, Villasis.

Police Brig. Gen. Rodolfo Azurin Jr., Ilocos regional police director, said security cameras caught the attackers near the crime scene and the footage could “give leads and determine some persons of interest.”

“Hopefully, witnesses will volunteer information that will lead to the arrest of the killers,” he said.

Azurin said the Special Investigation Task Force Maganes (SITG Maganes) had been formed to hasten the investigation of the killing. The police, he said, would “seek the truth and … pursue the case no matter who gets caught and who gets hurt.”

He described Maganes as “our partner in information advocacy.”

An active member of the provincial media, Maganes wrote for the community paper “Northern Watch” and worked as a commentator for block-time programs in some radio stations.

According to the National Union of Journalists of the Philippines, he was the 18th media worker murdered during the Duterte administration and the 190th since 1986.

“It is with great sadness that we learned of the passing away of (Maganes). There is no place for this heinous act in our beloved province of Pangasinan,” Lambino said in a statement.

Other local officials described Maganes as a “respected journalist and a true stalwart of truth and democracy.”

“Maganes’ constant battle for the truth had always put him at odds with those who, in their evil ways, had always tried to suppress it. Yet despite the dangers, he never ran away in fear,” said Pangasinan Rep. Ramon Guico III.

Secretary Martin Andanar of the Presidential Communications Operations Office and cochair of the Presidential Task Force on Media Security, met with Pangasinan police officials on Wednesday to discuss the investigation. He was joined by Undersecretary Joel Sy Egco, the task force executive director, who said he would look into all possible motives of the killing.

—With a report from Patricia Denise Chiu