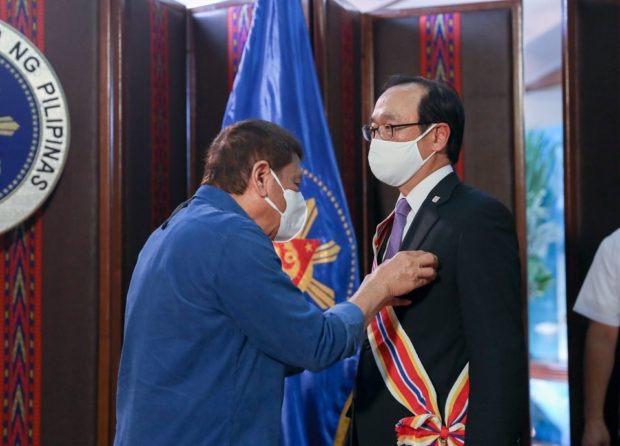 President Rodrigo Roa Duterte met and discussed matters with Japan’s outgoing ambassador to the Philippines Koji Haneda, who paid a farewell call on the President at the Malacañang Golf (Malago) Clubhouse in Malacañang Park, Manila on November 10, 2020. —PCOO

Photos shared by the Presidential Communications Operations Office on Wednesday showed Duterte conferring the Order of Sikatuna with the rank of Datu to Haneda during the courtesy call on Tuesday.

In a statement from the Office of the President, Duterte congratulated Haneda for his service to the country, as ties between Japan and the Philippines strengthened under the latter’s stint.

Malacañang said that it was during Haneda’s term that wide-ranging discussions to strengthen further the Philippines-Japan bilateral relations in various areas occurred — with topics ranging from maritime security, economic development cooperation, Mindanao peace process, and people-to-people and cultural exchange.  (With reports from Miggy Dumlao, Intern) [ac]