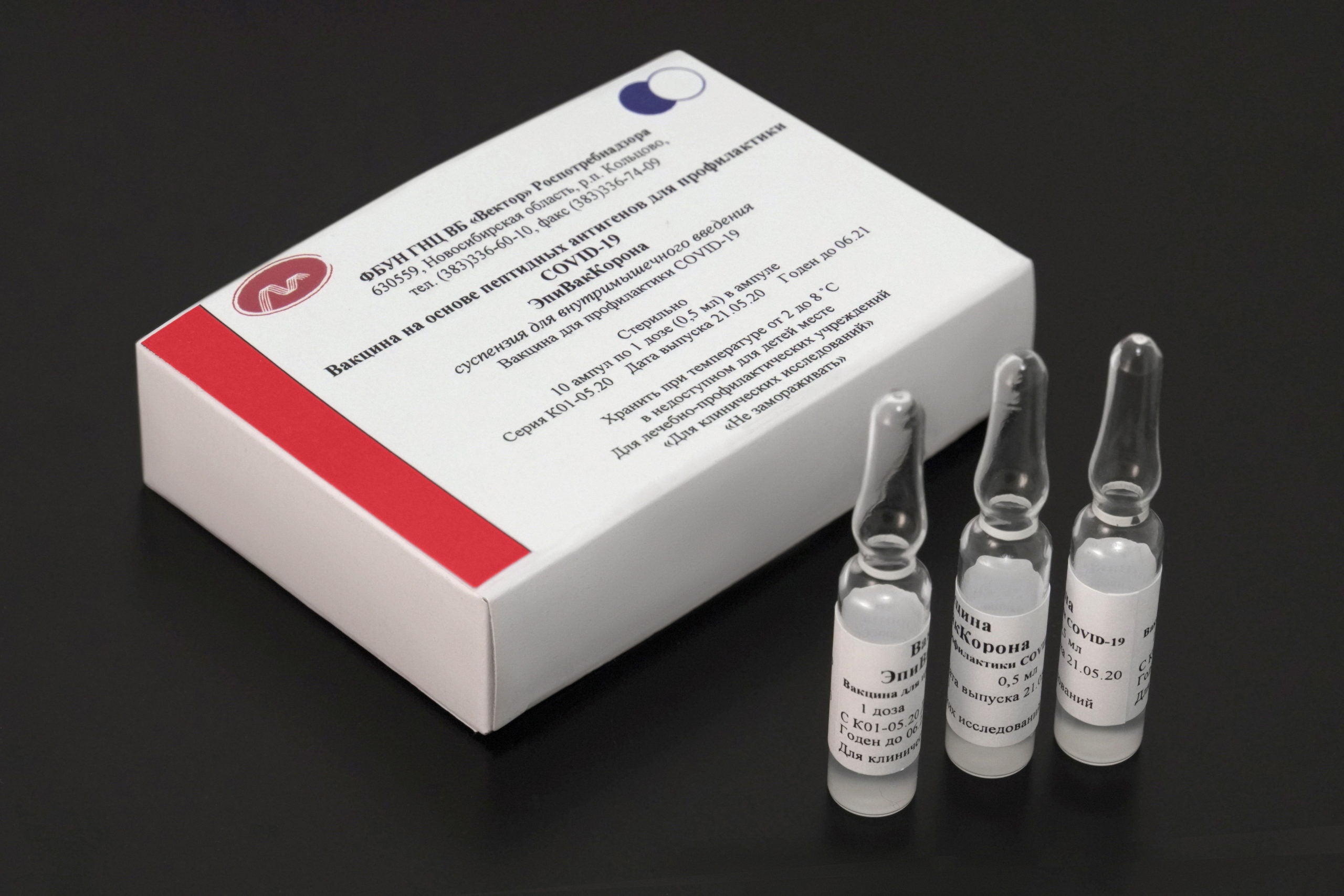 A view shows vials with EpiVacCorona vaccine against the coronavirus disease (COVID-19), developed by the Novosibirsk Region based Vector state research institute under Rospotrebnadzor service, in this undated handout photo at an unknown location in Russia. Rospotrebnadzor Federal Service for Surveillance on Consumer Rights Protection and Human Wellbeing/Handout via REUTERS

MOSCOW— Russia’s Sputnik V vaccine is 92% effective at protecting people from COVID-19 according to interim trial results, the country’s sovereign wealth fund said on Wednesday, as Moscow rushes to keep pace with Western drugmakers in the race for a shot.

The initial results are only the second to be published from a late-stage human trial in the global effort to produce vaccines that could halt a pandemic that has killed more than 1.2 million people and ravaged the world economy.

The results are based on data from the first 16,000 trial participants to receive both shots of the two-dose vaccine, the Russian Direct Investment Fund (RDIF), which has been backing its development and marketing it globally, said.

“We are showing, based on the data, that we have a very effective vaccine,” said RDIF head Kirill Dmitriev, adding that it was the sort of news that the vaccine’s developers would talk about one day with their grandchildren.

The analysis was conducted after 20 participants in the trial developed COVID-19 and examined how many had received the vaccine versus a placebo.

That is significantly lower than the 94 infections in the trial of a vaccine being developed by Pfizer Inc and BioNTech. To confirm the efficacy rate, Pfizer said it would continue its trial until there were 164 COVID-19 cases.

RDIF said the Russian trial would continue for six more months and data from the study will also be published in a leading international medical journal following a peer review.

Russia’s announcement follows swiftly on from results posted on Monday by Pfizer and BioNTech, which said their shot was also more than 90% effective.

The Russian results are another boost to other COVID-19 vaccines currently in development and are proof of the concept that the disease can be halted with vaccination.

Experts said knowledge about the trial’s design and protocol was sparse, making it difficult to interpret the figures released on Wednesday.

Scientists have raised concerns about the speed at which Moscow has worked, giving regulatory go ahead for the shot and launching a mass vaccination program before full trials to test its safety and efficacy had been completed.

Russia registered its COVID-19 vaccine for public use in August, the first country to do so, though the approval came before the start of the large-scale trial in September.

The so-called Phase III trial of the shot developed by the Gamaleya Institute is taking place in 29 clinics across Moscow and will involve 40,000 volunteers in total, with a quarter receiving a placebo shot.

The chances of contracting COVID-19 were 92% lower among people vaccinated with Sputnik V than those who received the placebo, the RDIF said.

That’s well above the 50% effectiveness threshold for COVID-19 vaccines set by the U.S. Food and Drug Administration.

“I can see no a priori reason to disbelieve these results, but it’s so very hard to comment, because there is so little data there,” said Danny Altmann, a professor of Immunology at Imperial College London.

He said that while the Russian release was similar in its level of detail to the one from Pfizer and BioNTech, the key difference was that Pfizer’s release came against a backdrop of a wealth of published data on how the trial was designed, its protocol, and what its endpoints were.

The results of the early-stage trials were peer reviewed and published in September in The Lancet medical journal.

The Russian drug is named Sputnik V after the Soviet-era satellite that triggered the space race, a nod to the project’s geopolitical importance for Russian President Vladimir Putin.

The vaccine is designed to trigger a response from two shots administered 21 days apart, each based on different viral vectors that normally cause the common cold: human adenoviruses Ad5 and Ad26.

The Pfizer and BioNTech vaccine uses messenger RNA (mRNA) technology and is designed to trigger an immune response without using pathogens, such as actual virus particles.

Russia is also testing a different vaccine, produced by the Vector Institute in Siberia, and is on the cusp of registering a third, Putin said on Tuesday, adding that all of the country’s vaccines were effective.

RDIF said as of Nov. 11 no serious side effects had been reported during the Sputnik V Phase III trial.

Some volunteers had short-term minor adverse events such as pain at the injection site, flu-like syndrome including fever, weakness, fatigue, and headache, it said.

Successful vaccines are seen as a crucial to restoring daily life around the world by helping end the health crisis that shuttered businesses and put millions out of work.

Russia registered the vaccine for domestic use in August, and has also inoculated 10,000 people considered at high risk of COVID-19 outside of the trial

Putin has said that Russia expects to start mass vaccinations by the end of the year.

“The publication of the interim results of the post-registration clinical trials that convincingly demonstrate Sputnik V vaccine’s efficacy gives way to mass vaccination in Russia against COVID-19 in the coming weeks,” Alexander Gintsburg, director of the Gamaleya Institute, said.

Moscow is rolling out a large network of vaccination rooms and residents who want the shot may be able to get it as early as next month if large volumes of doses are supplied by then, Deputy Mayor Anastasia Rakova said on Oct. 30.

However, production challenges remain. Earlier estimates that Russia could produce 30 million doses of the vaccine this year have since been scaled down.

Moscow aims to produce 800,000 doses this month, industry minister Denis Manturov has said, followed by 1.5 million in December. But significantly higher volumes of output per month are expected from early 2021.

In late October, the vaccination of new volunteers was temporarily paused due to high demand and a shortage of doses.

Officials have said that domestic production of the vaccine will be used first to meet Russia’s needs.

It is expected that these will in large part be produced in other countries and RDIF has previously announced a deal to manufacture 300 million doses in India and an undisclosed amount of doses in Brazil, China and South Korea.

Trials have also begun in Belarus, and are on track to begin soon in the United Arab Emirates, Venezuela and India.

Russia reported 19,851 new coronavirus infections in the past 24 hours and a record high of 432 deaths. At 1,836,960, its overall case tally is the fifth largest in the world, behind the United States, India, Brazil and France.

Read Next
Road clearing to resume in Bacolod in transition to ‘new normal’
EDITORS' PICK
Duterte: Authorities may take over hotels, but it’s not a ‘remedy’ in a democracy
When will PH get enough COVID-19 vaccines? ‘I really don’t know,’ Duterte says
Smart introduces Smart Barkada with the launch of Double GIGA
LT Group, Inc. Notice of Annual Shareholders’ Meeting 2/2
Duterte defends govt’s efforts vs COVID in 2020
Smart is fastest 5G Network in PH – Ookla
MOST READ
‘Duterte a total failure as leader. He must step down’ – group
Duterte ‘privately’ dealing with China invasion in West PH Sea – Palace
Ramon Tulfo says gov’t running PH like a ‘headless chicken’
Stop acting like a colonizer, PH business groups tell China
Don't miss out on the latest news and information.