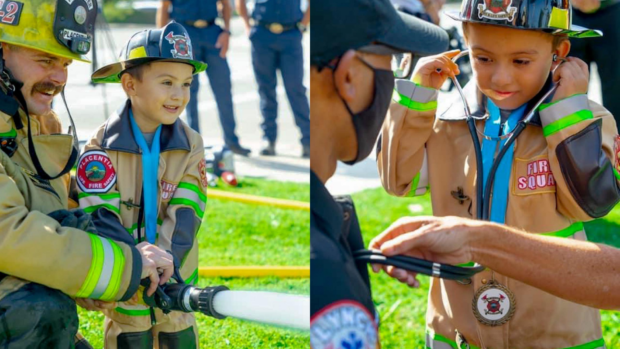 A 4-year-old boy was named an honorary firefighter and paramedic after he saved his younger brother from drowning in their family’s pool in California, United States.

Mason Ochoa rushed to help his sibling, Nicholas, when the latter fell into the pool on Oct. 20, as per NBC-affiliate KNBC last Friday, Nov. 6. Once he got a hold of Nicholas, Mason screamed for help while keeping his brother’s head above water.

Their mother Stephanie eventually spotted them and quickly told their father Jose about the accident. Jose then contacted 911 for assistance.

“My wife told me right now that my son fell in the pool and he wasn’t breathing, that he’s crying right now, but that his face is purple and he’s — she can’t talk right now I’m on my way to them,” he told a paramedic over the phone.

“That’s what was reported to us. He was non-responsive and not breathing,” paramedic Mike Bostick said in the report.

Lynch Emergency Medical Services soon arrived at the Ochoas’ home along with firefighters, as per its Facebook post the day after. Following the rescue, the emergency services group assured that Nicholas has already made a quick recovery.

The Placentia Fire and Life Safety Department and Lynch EMS celebrated Mason’s heroic act by making him an honorary firefighter and paramedic. The teams gave Mason his own firefighter uniform and taught him how to tie a gauze, use a stethoscope and operate a fire hose.

Mason’s grandfather, Raul Velez, later explained that there was no fence around the pool since they were preparing it for an open house, as per report. Velez also praised his grandchild and called him his hero.

After hearing of Mason’s quick thinking, the fire department’s chief joked that the boy already has a job waiting for him there, in around 14 years. Ryan Arcadio/JB