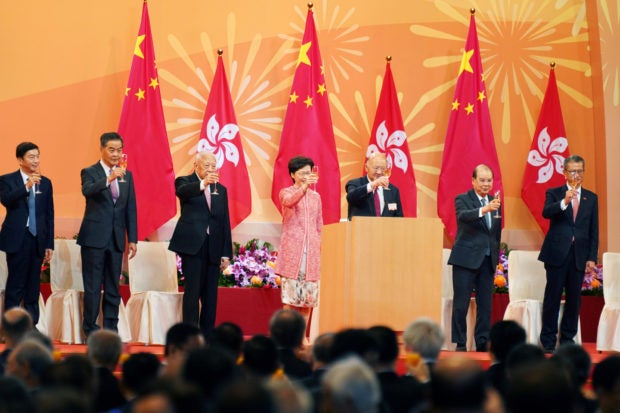 HONG KONG — Hong Kong disqualified four opposition members of its legislature on Wednesday for endangering security, raising the prospect of a walk-out by pro-democracy legislators who oppose what they see as Beijing’s ever tighter grip on the city.

The expulsions came shortly after China’s parliament adopted a resolution allowing the city’s executive to expel legislators deemed to be supporting Hong Kong independence, colluding with foreign forces, or threatening national security, without having to go through the courts.

On Monday, the then 19 democratic members of the 70-seat city legislature threatened to resign en masse if any of them was disqualified.

While the city’s Legislative Council is controlled by a pro-Beijing camp, the resignations of its pro-democracy lawmakers would turn it into a rubber stamp.

The opposition members have tried to make a stand against what many people in the former British colony see as Beijing’s whittling away of freedoms and institutional checks and balances, despite a promise of a high degree of autonomy.

“My mission as a legislator to fight for democracy and freedom cannot continue but I would certainly go along if Hong Kong people continue to fight for the core values of Hong Kong,” one of the disqualified assembly members, Kwok Ka-Ki, told reporters.

China denies curbing rights and freedoms in the global financial hub, but authorities in Hong Kong and Beijing have moved swiftly to stifle dissent after anti-government protests flared in June last year and plunged the city into crisis.

The city government said in a statement the four legislators – Kwok, Alvin Yeung, Dennis Kwok, and Kenneth Leung – were expelled from the assembly for endangering national security. It did not elaborate.

They were among 12 legislators who were earlier disqualified from standing in a legislative election, now postponed, for various reasons including collusion with foreign forces and opposition to the new national security law.

The disqualifications are likely to add to concern in the West about Hong Kong’s autonomy, promised under a “one country, two systems” formula when Britain handed it to China in 1997, as Joe Biden prepares to take over from Donald Trump as U.S. president, promising to promote democracy around the world.

The resolution by the Chinese parliament’s top decision-making body clearing the way for the disqualifications comes amid frustration in pro-Beijing circles in Hong Kong over what they see as opposition “delay tactics” to obstruct legislation.

Filibustering has long been common in Hong Kong where only half of the 70 seats in the legislature are elected and the other half stacked with pro-Beijing figures.

This month, eight opposition politicians were arrested in connection with a meeting in the Legislative Council in May that descended into chaos.

On June 30, Beijing introduced sweeping national security legislation to the city, punishing anything China considers subversion, secessionism, terrorism, and collusion with foreign forces with up to life in prison.

Since then, authorities have removed some pro-democracy books from libraries, banned certain songs and other activities in schools, declared some slogans illegal, and raided the newsroom of an anti-government tabloid.

Read Next
Recto tells PITC to waive commission for COVID-19 vaccine purchase
EDITORS' PICK
Manila is 78th most expensive city in the world for foreign workers
TeaM Energy pushes development programs to help in pandemic rebound
Want to help local farmers? Shop small and eat Real Food
Piolo Pascual: The Ultimate Heartthrob continues to level up
ICC is everything but a court of ‘white people’
Garcia softens stance, meets IATF halfway on swab-upon-arrival policy
MOST READ
Sharon Cuneta on living in the US: ‘Nagagawa ko lahat ng normal na bagay’
Mike Nieto asks fans: ‘No below the belt remarks’ toward South Korea
ICC is everything but a court of ‘white people’
Duterte-Duterte tandem possible but ‘winnability is another question’ — Binay
Don't miss out on the latest news and information.