Signal No. 3 now up in Metro Manila, parts of Luzon as Ulysses becomes typhoon | Inquirer News

Signal No. 3 now up in Metro Manila, parts of Luzon as Ulysses becomes typhoon 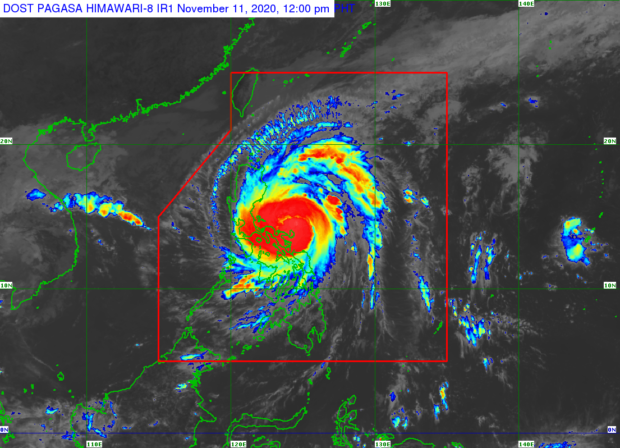 In its 11 a.m. severe weather bulletin,  Philippine Atmospheric, Geophysical and Astronomical Services Administration (Pagasa) said  TCWS No. 3, where winds of greater than 121 kilometers per hour (kph) up to 170 kph may be expected in at least 18 hours, is raised over:

Meanwhile, TCWS No. 2, where winds of greater than 61 kph and up to 120 kph may be expected in at least 24 hours, is hoisted over:

Based on Pagasa’s latest data, Ulysses intensified to a typhoon at 8 a.m. on Wednesday, and was last spotted 100 kilometers north of Virac, Catanduanes.

Ulysses also packed maximum sustained winds of 125 kph near the center, and gustiness of up to 155 kph.

The typhoon was also spotted moving west-northwestward at 20 kph.

“Due to the orientation of the track forecast, these provinces may fall within the inner rainbands or eyewall region of this typhoon during the passage,” Pagasa said.

Pagasa added that Ulysses is forecast to make landfall over Polillo Islands and mainland Quezon between Wednesday night and early Thursday morning.

Currently, light to moderate with at times heavy rains are being experienced over Metro Manila and the rest of Luzon and Visayas.

Moderate to heavy with at times intense rains, meanwhile, are expected over Cordillera Administrative Region, mainland Cagayan Valley, Catanduanes, Marinduque, the northern portion of Mindoro provinces, and the rest of Central Luzon between Wednesday night and early Thursday morning.

The state bureau also warned that Ulysses may cause a storm surge as high as three meters over the coastal areas of Quezon including Polillo Islands, Camarines Norte, Catanduanes, and the northern and eastern coastal areas of Camarines Sur.

“These storm surges, which may be accompanied by swells and/or breaking waves near the coast, can cause life-threatening and damaging coastal inundation,” Pagasa warned.