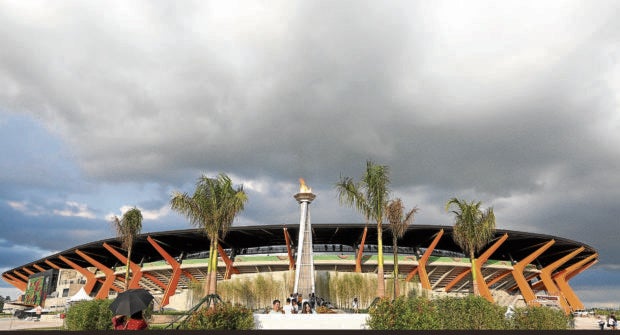 GAME NOT OVER The construction of this sports stadium and the P50-million cauldron at New Clark City in Tarlac province used during the 2019 Southeast Asian Games could be among the targets of investigation that opposition Sen. Risa Hontiveros is pushing her colleagues to undertake because of alleged irregularities. —INQUIRER PHOTO

MANILA, Philippines — Sen. Risa Hontiveros on Tuesday called for a “full-blown” investigation of the allegedly irregular deals in connection with the country’s hosting of the 2019 Southeast Asian (SEA) Games, especially the P9.5 billion in taxpayer money used to construct the main sports venue inside New Clark City (NCC) in Tarlac province.

In a privilege speech, Hontiveros raised doubts about the legality of the 2018 joint venture agreement between the Bases Conversion Development Authority (BCDA) and a Malaysian developer, MTD Capital Berhad, for the construction of the sports venue at the 9,450-hectare NCC complex in Capas and Bamban towns.

She said a “fake” joint venture agreement was used to secure a “behest loan” from a government bank in order to sidestep procurement laws.

“Now, the country may have been left with a gigantic white elephant in Central Luzon,” Hontiveros said.

The opposition senator said that following President Duterte’s recently ordered crackdown on graft and corruption, she was calling attention to the facilities that the government had built for the SEA Games.

She questioned why MTD did not seem to have made any contribution to the project, except for the actual construction work.

A Commission on Audit (COA) report said the sports facilities included an aquatic center, an athletics stadium and an “athlete’s village” capable of housing 1,000 people.

It said the agreed project cost to build them was P8.510 billion, “which will be contributed by the winning PSP (private sector partner) in the form of unencumbered advances to the JV (joint venture).”

Hontiveros said the P8.5-billion funding that MTD Berhad had purportedly poured into the project came from a P9.5-billion loan that was granted by Development Bank of the Philippines (DBP).

Aside from being contractually obligated to facilitate the loan, the BCDA was obliged to reimburse MTD for the capital it had supposedly “advanced” using the loan.

“MTD Berhad did not have any cash-in investment, yet they still put on an additional P1 billion into their loan proposal,” she said.

Citing documents, Hontiveros said that under the loan agreement, the BCDA was obligated to pay a total of P11 billion for the loan.

“And where will the BCDA get the funds to pay off MTD Berhad? Is it from the income derived by the venue? Not even, as this project has not had any clear income,” she said.

According to the senator, the BCDA must have sourced the funds amounting to P9.54 billion to pay MTD from its 2019 budget allocation.

“This project is riddled with badges of a fake joint venture. So again I ask: What has MTD Berhad contributed to this?” she said.

Hontiveros pointed out that even the Office of the Government Corporate Counsel (OGCC) and the COA had disputed claims that the deal involved a joint venture.

“And while all of these were ongoing, the chief of the OGCC was replaced, and his successor overturned the previous opinion and maintained that the transaction is aboveboard,” she said.

Hontiveros raised suspicions that the joint venture scheme was used to skirt the legal requirement of a public bidding and manipulate the grant of the project to a favored contractor.

She said she was appalled that MTD acquired the P9.5 billion in just three weeks from the time it was applied for.

“Would it have been possible that DBP quickly released the loan proceeds because it was facilitated by the BCDA? What was the loan collateral used? Was there sufficient scrutiny on the capitalization of MTD Berhad and the cash flow of the project?” Hontiveros asked.

The senator suspected that the project was financed by a behest loan, which shifts the burden of paying it to Filipino taxpayers, mainly the DBP depositors.

“What did the Filipino people derive with P9.5 billion charged from our pockets? A sports center that was used for just about a month, and presumably until now, the government continues to spend for its maintenance,” she said.

In a statement, the BCDA maintained that the transactions surrounding the construction of the sports facilities were “done in aboveboard and legal manner,” with endorsement from the Asian Development Bank and the OGCC.

“The joint venture agreement between the BCDA and MTD passed the scrutiny of applicable Philippine laws, rules and regulations,” the BCDA said.

No undue advantage was given to MTD as its unsolicited proposal underwent a “rigorous negotiation process” and a “competitive challenge,” the agency said.

“Its world-class quality brought great pride and honor not only to our national athletes but to the entire Filipino community who witnessed the historic hosting of the 30th Southeast Asian Games,” the BCDA said.

“This is a world-class stadium, built in record time, with the advice no less of World Bank, and/or Asian Development Bank on how to finance and how to do this project. The Southeast Asian Games would not have been as successful as it was if we only have the dilapidated stadium of Rizal Memorial (Complex), of Ultra,” Cayetano said.

Ultra is the former name of the Philippine Institute of Sports Multi-Purpose Arena in Pasig City.

Cayetano is the sister of former Speaker and Taguig Rep. Alan Peter Cayetano, who is chair of the Philippine Southeast Asian Games Organizing Committee (Phisgoc), a private foundation that managed the country’s hosting of the SEA Games.

The ex-Speaker is also embroiled in the SEA Games controversy due to alleged irregularities in transactions entered on behalf of the government, including the allegedly overpriced P50-million cauldron, which he had called a priceless “work of art.”

Senators were told in a hearing last month by Guillermo Iroy Jr., executive director of the Philippine Sports Commission (PSC), that the private foundation headed by the Taguig representative still owed P387 million to some of its suppliers and had asked the PSC to request the Department of Budget and Management (DBM) to release additional funds to settle Phisgoc’s debts.

According to Hontiveros, the P9.5 billion that went to MTD could have been used to augment the government’s funds to combat the coronavirus, or as aid to survivors of Typhoon “Rolly” (international name: Goni).

She also doubted whether the opinions of the DBM, Department of Finance, Bangko Sentral ng Pilipinas and the OGCC were sought in order to perform their mandate of protecting the interests of the Filipino taxpayers.

“During this privilege speech I have asked many questions, but it is the public that deserves the answers,” she said. INQ