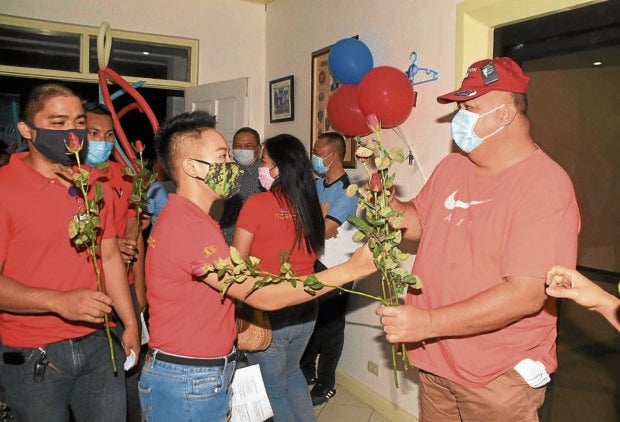 President Duterte has appointed Maj. Gen. Debold Sinas, the Metro Manila police director who was charged with violating quarantine measures for his “mañanita” birthday party amid a coronavirus lockdown, as the next Philippine National Police chief.

“Chief Sinas may not be perfect, but he was able to impress the President with his dedication in the fight against illegal drugs,” presidential spokesperson Harry Roque said in a press briefing on Monday.

Roque said the appointment to the top PNP post was a matter of trust and confidence, and Sinas is “for the moment, the most trusted by the President, so let’s leave it at that.”

Sinas will replace Gen.Camilo Cascolan, who retires on Tuesday. Cascolan was PNP chief for two months while Sinas will serve until May next year when he reaches the compulsory retirement age of 56.

The new PNP chief was charged criminally and administratively for alleged violations of physical distancing and mass gathering rules in May, when a strict lockdown in Metro Manila was in place, for a birthday mañanita (midnight serenade) at the headquarters of the National Capital Region Police Office (NCRPO).

The incident practically made mañanita an everyday word associated with the police official.

But according to Interior Secretary Eduardo Año, “That case (mañanita) is still under preliminary investigation so it has not been resolved. That hasn’t reached the court so there is still no pending case by its definition.”

On Monday, Año told reporters that “he (Sinas) went through the career ladder (in the PNP) … If you look at his qualifications, he is very qualified although controversial because of the mañanita.”

Sinas, a member of the Philippine Military Academy Class of 1987, also served as secretary of the directorial staff at the PNP national headquarters and Central Visayas police director. He had a brief stint as PNP Crime Laboratory director and was with the Criminal Investigation and Detection Group, the PNP intelligence group, and served in the Soccsksargen, Zamboanga Peninsula, Central Luzon and Cordillera Administrative Region police offices in various capacities.

Mr. Duterte had refused to relieve Sinas from his NCRPO post following the mañanita controversy. He described the officer as good and honest, and should not be faulted for the decision of PNP personnel to serenade him.

The Makabayan bloc warned of more human rights violations, recalling arrests and extrajudicial killings during Sinas’ stint as police director for Central Visayas from 2018 to 2019.

Central Visayas saw a rise in unsolved killings of people linked to the illegal drug trade on Sinas’ watch, according to the Commission on Human Rights (CHR) in the region.

CHR chief investigator Leo Villarino said Sinas would always be remembered as the police official who was firm in his decision not to give human rights investigators copies of police reports on the killings in Central Visayas.

“While we appreciate his relentless campaign against illegal drugs in Central Visayas, there were just so many killings [on] his watch,” Villarino said.

“The CHR is conducting an investigation [of] these killings, although we failed to get the documents from the police. I understand he was just following orders from higher-ups. But soon, when he becomes the chief PNP, I hope, he will scrap that policy out,” he said.

“As the chief law enforcer in the country, we expect nothing less from him,” Aglipay said.

Año said he expected Sinas to “lead the PNP organization with higher intensity in the fight against illegal drugs, criminality, extremism or extremists, and communists, bandits, terrorists and he should continue the cleansing program of the PNP to instill professionalism and discipline and remove, if there are still remaining, scalawags from the organization.”

“So let’s give him a chance. The President has spoken, then let’s give Sinas a chance,” he said.

“Despite that, General Sinas should demonstrate his sincerity to continuously clean up the ranks of our police force starting by leading by example at all times,” he said.

Sen. Panfilo Lacson, a former PNP chief, took a forgiving tone. “Barring any controversy that Major General Sinas got entangled with in the past, he is a good choice for the top PNP post,” he said.

Sen. Risa Hontiveros said the President could have made a “more meritorious choice” for PNP chief than Sinas.

“While Debold Sinas was my late husband’s underclassman and an old friend, unfortunately, the poor manner in which the PNP has acted on the waves of violence, as well as minimized the risks of the coronavirus pandemic under his previous commands, betrays his level of competence for this new role,” she said in a statement.

Read Next
Gov’t mulls $9-billion loan for purchase of vaccine
EDITORS' PICK
Filipinos celebrate PH’s first gold medalist Hidilyn Diaz
Harnessing technology for quality education
Hidilyn Diaz wins weightlifting gold in Tokyo Olympics
‘I believe’: Hidilyn Diaz bucks the odds to win historic Olympic gold
Connect to PH’s fastest network with new Signature Plan Lite at only P599 per month
Tips for a cheerful life
MOST READ
Hidilyn Diaz wins weightlifting gold in Tokyo Olympics
Go to war with China over West PH Sea? It will be a ‘massacre’, says Duterte
FLASHBACK: The day Hidilyn was shocked over inclusion in oust-Duterte matrix
Hidilyn shoots not only for gold but also for permanent place in PH sports history
Don't miss out on the latest news and information.