Festive Filipinos trying to save Christmas from coronavirus | Inquirer News

Festive Filipinos trying to save Christmas from coronavirus

MANILA, Philippines — The Philippines boasts one of the world’s longest Christmas seasons, kicking off in September with fairy lights and artificial trees decorating malls, festive tunes on the radio and party-packed calendars.

But the coronavirus pandemic looks set to be the grinch that spoils the four-month-long celebration this year.

Gatherings are banned, night-time curfews are in force, church attendance is limited, and many are broke after measures to contain the virus devastated the economy and left millions jobless.

Philippine crooner Jose Mari Chan, whose song “Christmas In Our Hearts” heralds the start of the festivities when it hits the airwaves on September 1, summed it up: “Sadness surrounds us.”

Family get-togethers, karaoke parties and lavish spending on gifts, which usually mark the countdown to Christmas, have been upended.

But despite the bleak conditions, fiesta-loving Filipinos say they are determined to stop the virus from stealing all their Christmas cheer. 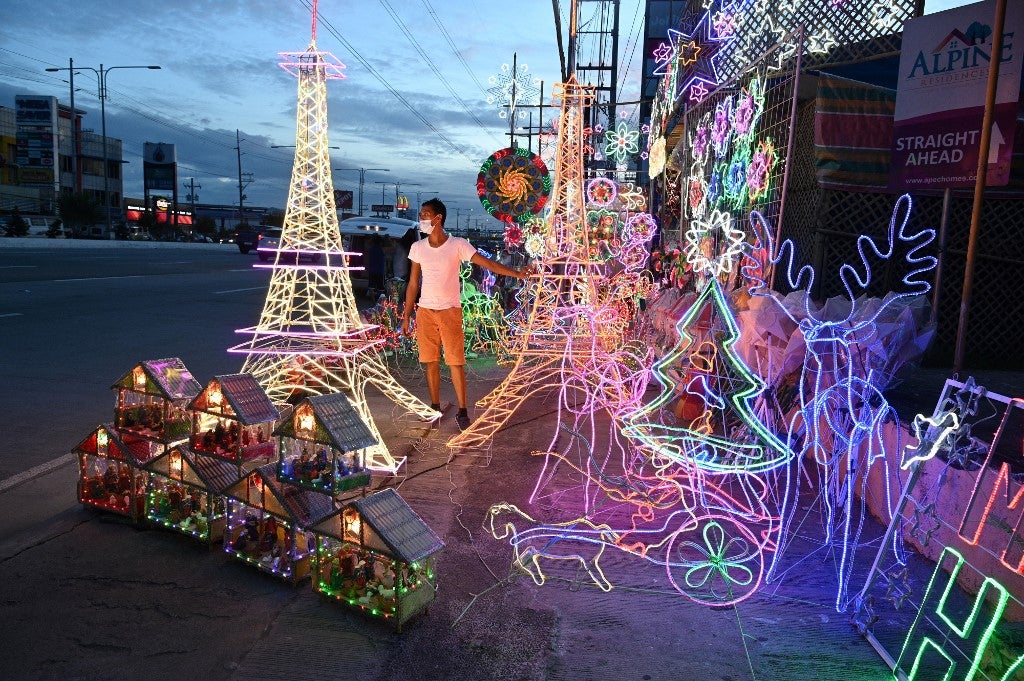 This photo taken on October 6, 2020 shows a worker standing beside lanterns and lit ornaments, including several shaped in the likeness of the Eiffel Tower, for sale during the festive season at a shop in San Fernando town in Pampanga province. (Photo by Ted ALJIBE / AFP)

“With or without Covid we have to celebrate Christmas whatever it takes, this is a Filipino tradition,” said Cecilia Moore, wearing a mandatory mask as she paid 2,500 pesos ($52) for festive lights to decorate her home.

Her husband temporarily lost his job on an oil tanker when the country went into lockdown in March, hurting the family’s finances.

But Moore said she needed something colourful to dispel the gloom hanging over her family.

“Even though times are hard, we still buy lanterns to make us happy,” the 32-year-old said.

It is not clear why Filipinos start celebrating Christmas in September — months before most other countries — but sociologist Yellowbelle Duaqui said it could be cultural: they love to party.

“Filipino hospitality is known to be the best in the world… we love to entertain,” she said. 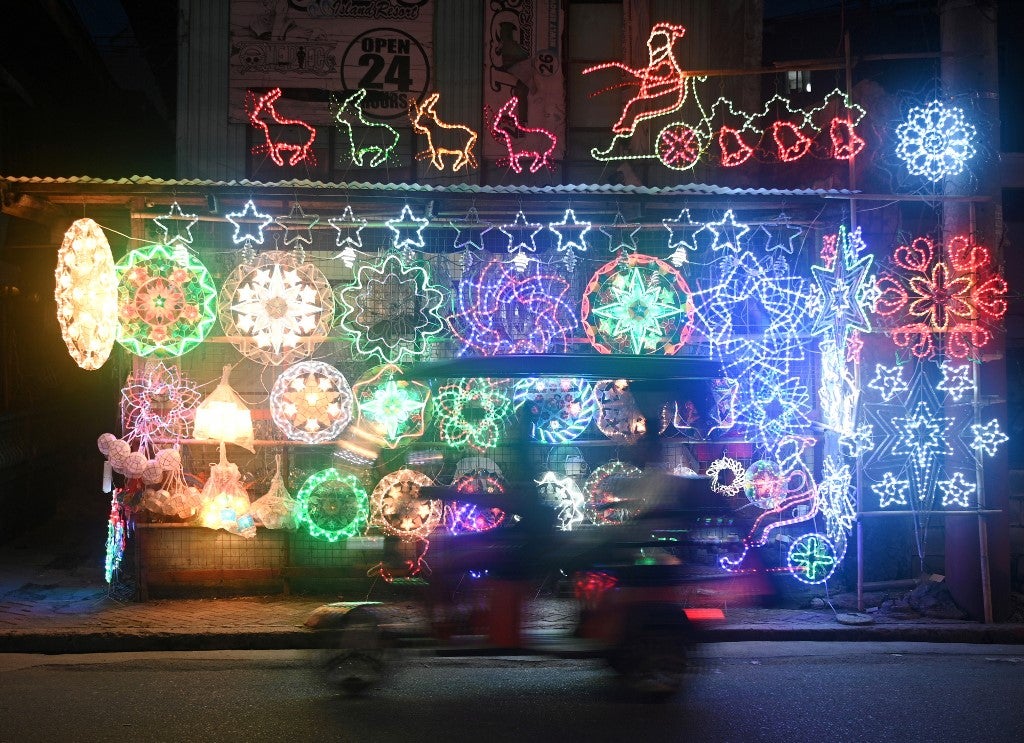 This photo taken on November 5, 2020 shows lanterns and lit ornaments for sale during the festive season at a shop in San Fernando town in Pampanga province. (Photo by Ted ALJIBE / AFP)

Jeffrey Lopez, who makes festive lights in San Fernando near Manila, said he has been flat out since reopening in August after a two-month shutdown.

Sales reach 40,000 pesos a day and more than twice that on weekends — similar to pre-pandemic levels.

“It feels as though Covid has not hit us,” Lopez told AFP at his workshop, where colourful lights in the shape of reindeer, Santa Claus and his sleigh, and even the Eiffel Tower are lined up outside.

“Nothing, not even the pandemic, can stop the coming of Christmas.” 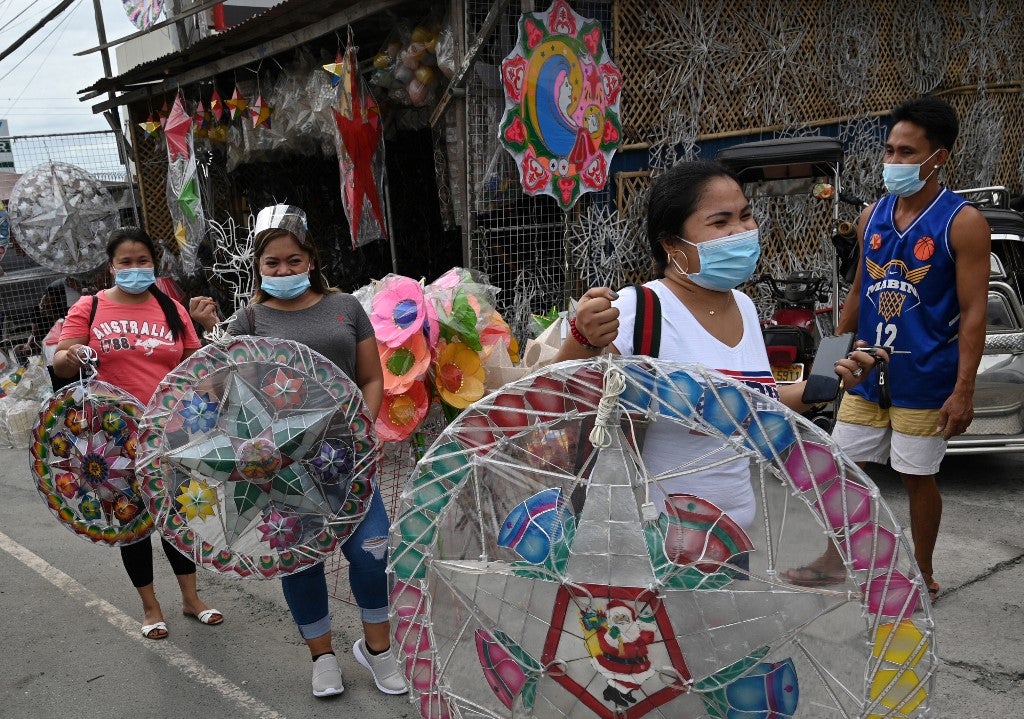 This photo taken on October 6, 2020 shows customers walking away with newly-purchased lanterns for the festive season in San Fernando town in Pampanga province. (Photo by Ted ALJIBE / AFP)

But many retailers are suffering this season.

Normally packed shopping malls — the centre of community life — are quieter than usual as people stay home for fear of catching a virus that has infected nearly 400,000 in the country.

Some shops are boarded up and many of those that are open offer steep discounts of 50-70 percent.

“A lot of people lost a lot of money and it’s not that easy to recover that,” said Roehlano Briones, a senior research fellow at the state-run Philippine Institute for Development Studies. 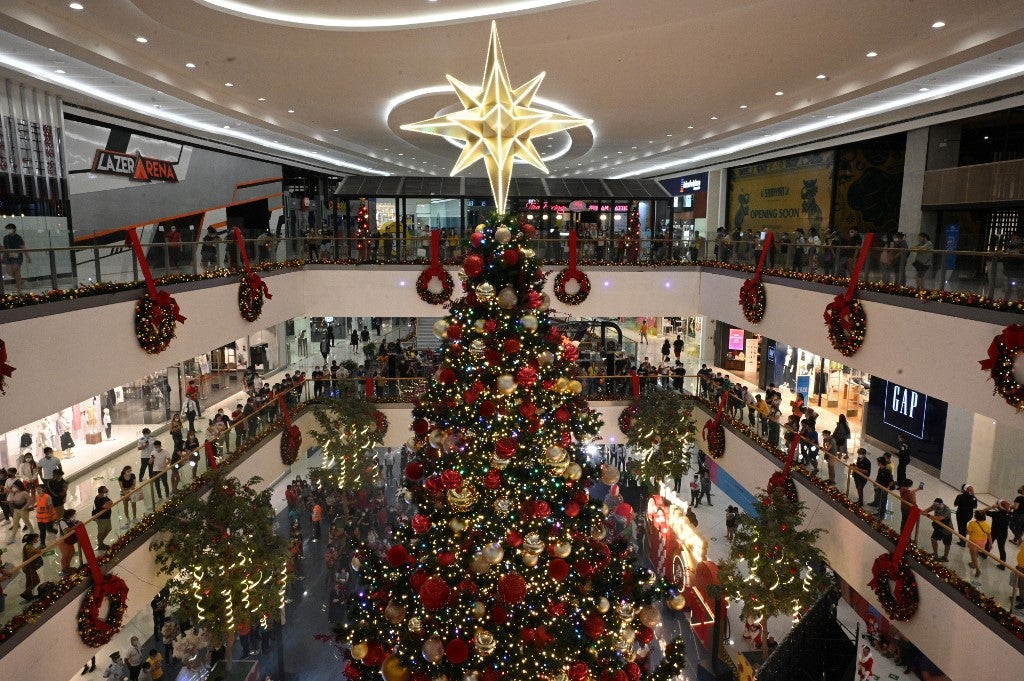 This photo taken on November 7, 2020 shows shoppers watching the lighting ceremony of a 60-foot (18.29 meter) tall Christmas tree at the Mall of Asia in Manila. (Photo by Ted ALJIBE / AFP)

Christmas festivities during the so-called “Ber months” — which refers to the September-December months ending in -ber — normally drive up consumer spending by about 12-18 percent in the fourth quarter compared with other quarters, Briones said.

The trend will continue this year “but it will be subdued”, he added.

Many household budgets have also been drained by the loss of monthly remittances from relatives working abroad after they lost their jobs due to the global health crisis. 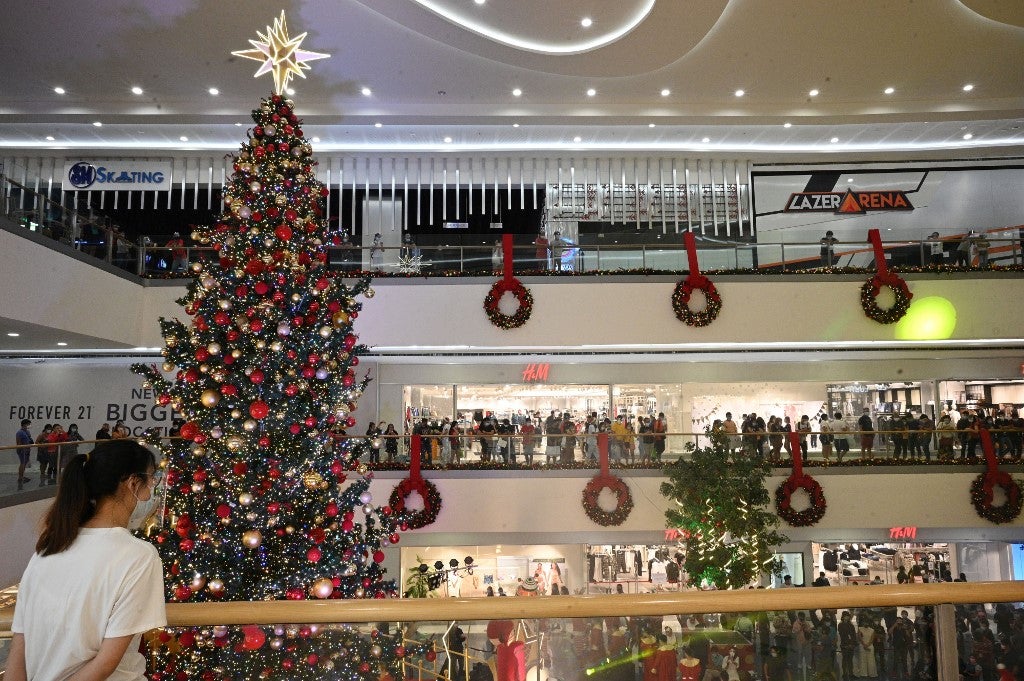 This photo taken on November 7, 2020 shows a shopper watching the lighting ceremony of a 60-foot (18.29 meter) tall Christmas tree at the Mall of Asia in Manila. (Photo by Ted ALJIBE / AFP)

The crooner Chan, describing himself as a “little drummer boy who heralds the advent of the Christmas season”, said the pandemic served as a reminder to Filipinos of “what really matters”.

“There are a lot of our brothers who are out of work, who are hungry,” he told AFP.

“These Ber months should awaken in us that sense of generosity and kindness towards them.”