After three days of record highs, 122,075 new cases were recorded over 24 hours, according to Johns Hopkins University, a record in itself for a weekend.

Another 991 deaths were added to the fast-growing toll of victims, which now stands at 237,016.

“On Monday I will name a group of leading scientists and experts as transition advisors to help take the Biden-Harris plan and convert it into an actual blueprint that will start on January 20, 2021,” Biden told supporters.

The pledge came in his first speech since being projected as the winner of the presidential election, signaling that he plans to prioritize the pandemic from the outset. 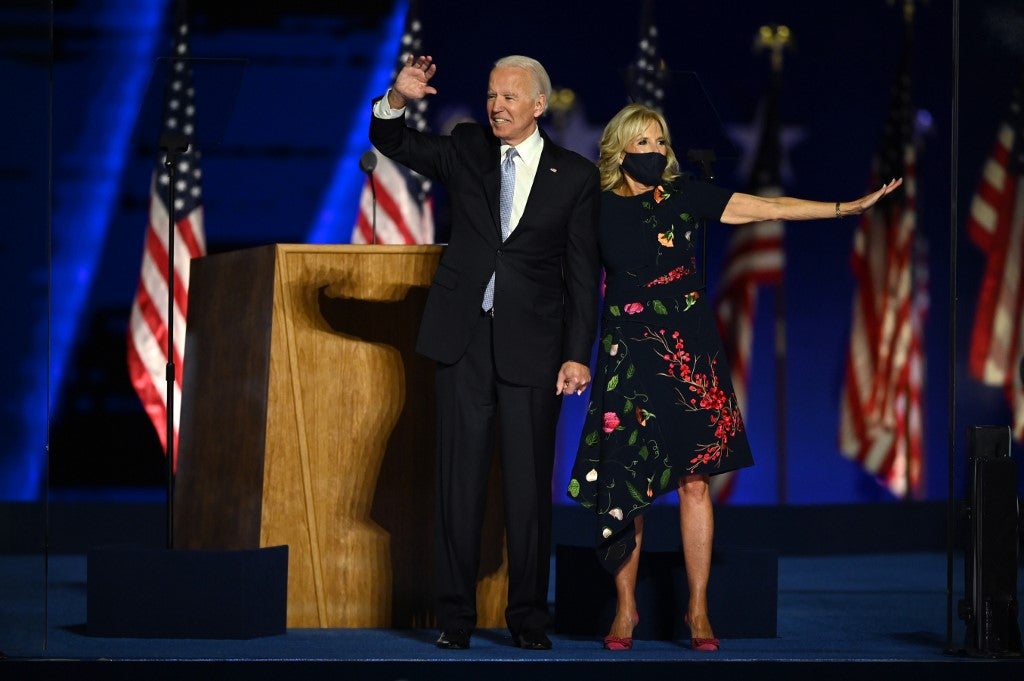 US President-elect Joe Biden stands with wife Jill Biden after delivering remarks in Wilmington, Delaware, on November 7, 2020, after being declared the winners of the presidential election. (Photo by Jim WATSON / AFP)

The US is the world’s hardest hit country in terms of deaths and total infections, which now stand at more than 9.8 million.

The outbreak has been surging for weeks in almost every part of the country, with the Midwest suffering the worst effects.

Cases are expected to surge further as the country moves into winter and people switch to socializing indoors, prime conditions for spreading the virus.

Biden has placed his pandemic response plan at the center of his appeal to the American people, repeatedly rebuking President Donald Trump for grossly mishandling the public health response.

He was rewarded Saturday with victory over his election rival after a tense four days of ballot counting.

Read Next
Joe Biden vows to unite America after ‘convincing’ victory
EDITORS' PICK
On Day 2 of implementation, gov’t says workers now exempt from ‘no vax, no ride’ policy
Over 3 Million worth of prizes to be won at Smart Padala’s SENDali Manalo Promo!
Acer starts the year off strong with the Aspire Vero National Geographic Edition
Gear up and get ready to play with Yamaha Mio Gear
Metro Manila posts lowest temperature yet this ‘amihan’ season at 19°C
DOH: 28,471 new COVID-19 cases in PH; active cases now 284,458
MOST READ
Cold-case investigation names surprise suspect in Anne Frank’s betrayal
Derek Ramsay on being married to Ellen Adarna: ‘Gumaan ‘yung mundo ko’
Czech anti-vax singer dies after deliberate infection
Emma Stone calls Andrew Garfield a ‘jerk’ after he ‘lied’ about his ‘Spider-Man: No Way Home’ appearance
Don't miss out on the latest news and information.