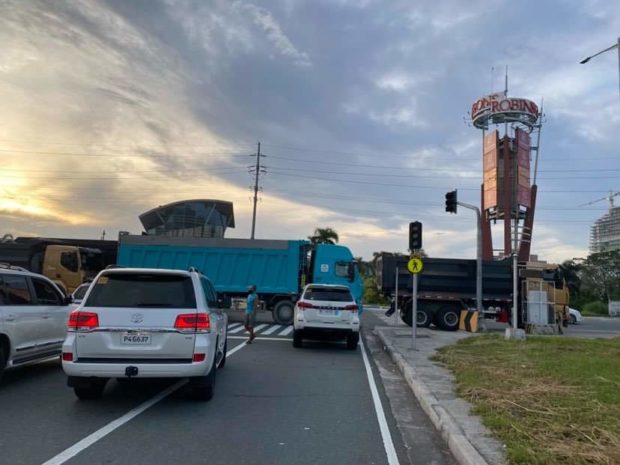 CITY OF SAN FERNANDO—Haulers of Mt. Pinatubo sand and gravel barricaded nine toll gates of the North Luzon Expressway (NLEX) with 150 trucks on Saturday morning and inconvenienced motorists and commuters trapped in the standstill that started at 6 a.m. and lasted for around two hours.

The truckers demanded that  NLEX Corp. must allow more than 2,000 12 -14 wheeler trucks to pass through the NLEX, according to Lennard Lansang, president of the Porac Truckers and Haulers Association.

NLEX banned the said trucks due to repairs in the Candaba viaduct.

Lansang said NLEX Corp. prohibited 12 and 14 wheeler trucks for two months now although the group members agreed to reduce the sidings of their trucks by 1.5 meters and comply with  the expressway’s weight requirement.

NLEX Corp. officials did not attend a scheduled meeting on Nov. 6 meeting, he said.

The barricade was lifted after two hours when Pampanga Gov. Dennis Pineda promised to take up the matter with national leaders.

“The NLEX is government-owned. It should be used by the people,” Pineda said as he also expressed concern over the income losses of some 4,000 drivers and their assistants.