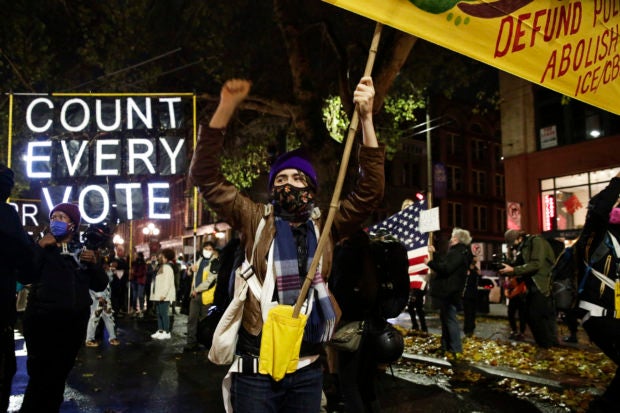 Demonstrators hold signs during a march to “Count Every Vote, Protect Every Person” on the day after the US Presidential Election in Seattle, Washington on November 4, 2020. – Democratic presidential challenger Joe Biden on November 4 neared the magic number of 270 electoral votes needed to win the White House with several battleground states still in play, as incumbent President Donald Trump challenged the vote count. (Photo by Jason Redmond / AFP)

Washington, United States — US police have detained two men outside a Philadelphia polling station in Pennsylvania, a battleground state yet to declare a winner in the presidential election, local media reported Friday.

Trump, narrowly ahead in Pennsylvania, has made unsubstantiated claims about vote-rigging in these key states.

Shortly after 10 pm (0300 GMT) two men were detained outside the Philadelphia Convention Centre where vote counting is ongoing, according to the Philadephia Inquirer.

The local newspaper said the men were detained following a tip-off, first reported by 6ABC Action News Thursday night, that an armed group was heading to the center.

No injuries have been reported.

The hugely contentious US election has come down to four states — Pennsylvania, Arizona, Georgia, and Nevada — deciding the victor.

Since Election Day the president has fired off tweets calling for ballot counting to be stopped, and contended without proof there has been voter fraud.

But his tweets have been masked with notices telling people the claims are misleading.

On Thursday Facebook shut down the pro-Trump group “Stop the Steal” that was organizing protests against vote-counting.

Philadelphia police did not immediately respond to AFP’s request for comment.