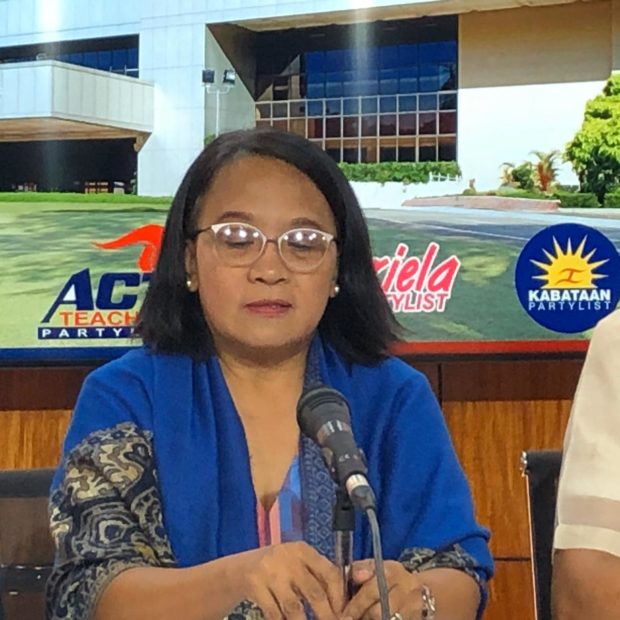 MANILA, Philippines — A lawmaker from the House of Representatives’ Makabayan bloc has thanked Speaker Lord Allan Velasco for defending them against accusations of red-tagging, or linking them to communist rebels.

In a statement on Thursday, Alliance of Concerned Teachers Rep. France Castro said that Velasco’s actions meant a lot to them, as he did it despite them having political differences.

Velasco is an ally of President Rodrigo Duterte, while the Makabayan bloc has been critical of the current administration’s policies — from the COVID-19 pandemic response to certain programs like the passage of the Anti-Terrorism Law, and the supposed subservience to China.

(We are very thankful to Speaker Velasco.  What he did, to defend his colleagues in Congress especially since he is the Speaker, it is only now that I heard a Speaker speak like this.)

Last October 27, Velasco notably defended the Makabayan bloc from accusations by Armed Forces of the Philippines Southern Luzon Command chief Lt. Gen. Antonio Parlade Jr., who insisted that the lawmakers are “card-bearing members” of the Communist Party of the Philippines (CPP).

The CPP is the umbrella organization that oversees the New People’s Army, the communist armed movement that has been waging guerrilla warfare for more than five decades.

“As Speaker of the House, I am duty-bound to protect them from potential harm due to these careless accusations so that they may carry their legal and constitutional mandate as members of Congress,” Velasco noted in a statement.

“General Parlade should be more circumspect and cautious in issuing statements against House members whose lives he may place at great risk and danger sans strong evidence,” he added.

The issue of Makabayan bloc lawmakers being part of CPP was again brought to light after Parlade warned actress Liza Soberano of being affiliated with Gabriela Women’s party-list.

After Soberano spoke in a forum about safe spaces for women hosted by Gabriela,  Parlade urged people not to red-tag her because she is not yet an NPA member. But several individuals saw Parlade’s advice as a veiled threat.

Parlade also told Soberano and Miss Universe 2018 Catriona Gray that some youth members from Gabriela ended up with the NPA, either dead or caught in battle.  He noted that fellow celebrity Angel Locsin would not tell them the truth about her sister Ella Colmenares, whom he accused of being an NPA rebel.

Castro said that they feel relieved that Velasco — who admitted that he does not agree with the said bloc on some issues — has issued such statements condemning the red-tagging incidents.

(We somehow feel protected and assured with the Speaker’s statements, although we still exercise caution for our security and safety.)