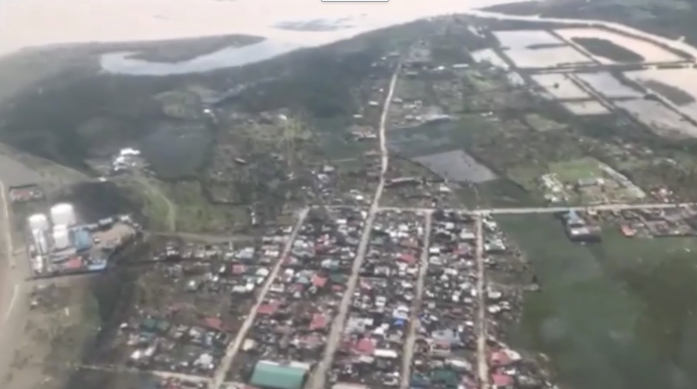 Catanduanes officials on Thursday pleaded to the national government for funding to rebuild its devastated infrastructure in the wake of Typhoon “Rolly” (international name: Goni), as well as to respond to its other current needs.

Gov. Joseph Cua said the provincial government’s calamity fund had already been depleted given the series of problems it had to face. “Aside from the pandemic, a week after Typhoon ‘Quinta,’ Supertyphoon Rolly hit us,” he said at a press briefing.

“We really need help from the national government through the [Office of Civil Defense], as [Budget Secretary Wendel Avisado] said we could not get funds directly in the local government without passing through the OCD,” Cua added.

Rolly made its first landfall in Bato town, Catanduanes, on Sunday, destroying some 10,000 houses and killing six people.

Damage to public infrastructure was estimated at P1 billion and to agriculture, P1.4 billion, particularly to the abaca industry, the province’s main agricultural sector, at P1.296 billion.

He said the number of casualties was relatively low because the residents had been evacuated in time, and those that had not been able to go to evacuation centers were taken in by private households.

“Many private houses took care of those who had not been part of our forced evacuation,” Cua said.

The governor thanked the national government for promptly checking up on the province after the typhoon and bringing relief items for its people.

In the same briefing, Catanduanes Rep. Hector Sanchez called on Congress to provide funds in the 2021 budget for the repair of vital infrastructure, including hospitals and the capitol building, in the province.

The funds are needed to completely restore the province’s power and water supply.

As of Thursday, water supply was still down, and 90 percent of electrical posts had been damaged, Cua said.

Virac Mayor Sinforoso Sarmiento Jr. said the capital town could no longer provide funds for the repair of the water system, which had been extensively damaged.

It would have to depend on the assistance from the provincial government and the national government to provide clean water to its residents, Sarmiento said.

Three national roads in Catanduanes have remained impassable to motorists due to landslides and fallen trees and electric posts, according to the Department of Public Works and Highways (DPWH). As of Thursday, DPWH teams had been clearing sections of the Catanduanes Circumferential Road spanning several municipalities, the Jct. Bato-Baras Road K0012+000 – K0013+000 and K0013+600 sections in Bato, and sections of the Baras-Gigmoto-Viga Road in Baras town.

“We are looking into augmenting our teams in Catanduanes to expedite our clearing operations in vital areas,” said Public Works Secretary Mark Villar.

TGP Rep. Jose Teves Jr., a former Catanduanes vice governor, asked the national government to give an additional internal revenue allotment equivalent to one month to the province and other areas badly affected by the typhoon.

This was similar to the assistance that the national government gave to local governments for the coronavirus pandemic, Teves noted.

“The situation of our province is very difficult. If we continue to be in this situation, the [Department of Social Welfare and Development, or DSWD] or national agencies would not be sending us aid every day. But the mayors could do something if they have funds,” he said.

Teves said he had made his suggestion in a letter to Avisado.

Avisado said the P3.6-billion National Disaster Risk Reduction Management fund could not be released directly to local governments, but they could request for assistance for the rehabilitation or reconstruction of permanent structures to the OCD.

According to Defense Undersecretary Ricardo Jalad, requests to access the disaster relief fund are coursed through the OCD, but these are subject to approval by the Office of the President. But he said the OCD would immediately process any fund request so it could be promptly sent for approval to the President.

As to whether local governments could get immediate cash assistance, Avisado said he would see if this was possible should a national calamity be declared in areas affected by Rolly.

With such a declaration, there are ways for the national government to provide direct aid to local governments, he said. This is already being studied, he added.

The local governments, Avisado said, could also ask for help from other government agencies with quick response funds, including the DSWD, Department of Agriculture, Department of Education, Department of Health, DPWH and the National Electrification Administration.

Avisado vowed to support efforts to include funding for infrastructure repair in the affected provinces in the 2021 budget. He said he would try to shepherd these through Congress and up to the bicameral conference. —WITH A REPORT FROM DONA Z. PAZZIBUGAN