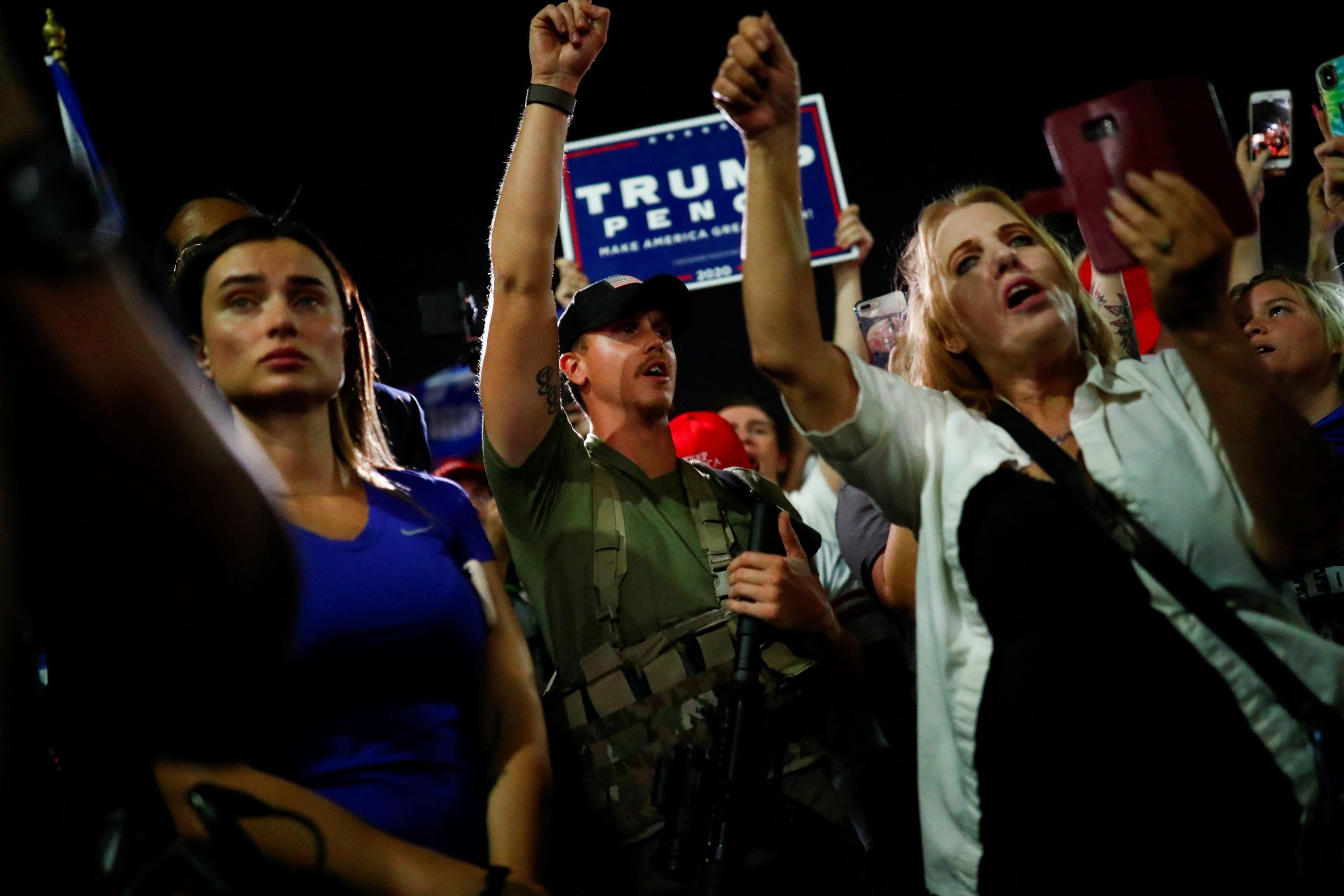 Supporters of U.S. President Donald Trump gather in front of the Maricopa County Tabulation and Election Center (MCTEC) to protest about the early results of the 2020 presidential election, in Phoenix, Arizona November 4, 2020. REUTERS/Edgard Garrido

PHOENIX —A crowd of Donald Trump supporters, some armed with rifles and handguns, gathered outside an election center in Arizona on Wednesday night after unsubstantiated rumors that votes for the Republican president were deliberately not being counted.

Chanting “Stop the steal!” and “Count my vote,” the mostly unmasked protesters stood in front of the Maricopa County Elections Department in Phoenix, as Democratic presidential candidate Joe Biden held a razor thin lead in the critical battleground state. Some news outlets have called Arizona for Biden, but Trump’s campaign says it is still in play.

A victory for Biden in Arizona would give the Democrat 11 electoral votes, a major boost in his bid to win the White House, while severely narrowing Trump’s path to re-election, in a state the Republican won in 2016.

On Election night Fox News and the Associated Press called Arizona for Biden, even though only just over 70% of the vote had been counted, a move that infuriated Trump and his aides.

Some of the roughly 200 protesters, who were faced by a line of armed county sheriffs, chanted “Shame on Fox!”. Some said they came out after a tweet from Mike Cernovich, a right-wing activist.

Chris Michael, 40, from Gilbert, Arizona, said he came to make sure all votes are counted. He said he wants assurances that the counting was done “ethically and legally.”

Rumors spread on Facebook Tuesday night that some Maricopa votes were not being counted because voters used Sharpie pens to mark their ballots. Local election officials insisted that was not true.

With the count still underway in several key states, Trump has accused the Democrats of trying to steal the election without evidence and filed lawsuits in several states related to vote-counting.

A similar scene played out on Wednesday afternoon in downtown Detroit, where city election officials blocked about 30 people, mostly Republicans, from entering a vote-counting hall amid unfounded claims that the vote count was fraudulent.

Trump has filed a lawsuit in Michigan to stop vote-counting that the secretary of state called “frivolous.”

The protests echoed the “Brooks Brother riot” during the 2000 recount in Florida that ultimately handed the presidency to Republican George W. Bush. A crowd of blazer-clad Republican protesters stormed a building where a hand recount was underway in a heavily Democratic district, forcing poll workers to stop counting ballots.