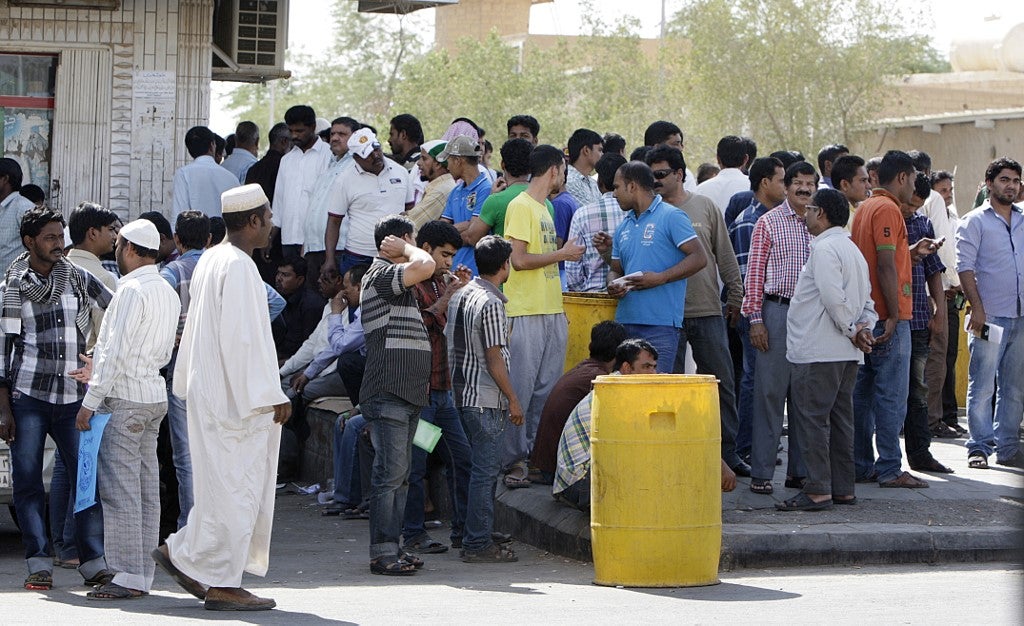 (FILES) A file photo taken on November 3, 2013 shows foreign workers gathering outside Saudi immigration department as they try to get visas and legalise their work situation, in the capital Riyadh  (Photo by Fayez Nureldine / AFP)

Saudi Arabia said Wednesday it will ease key restrictions on millions of foreign workers, under reforms to its labor policy that is blamed for widespread abuses and exploitation.

Human rights groups have repeatedly called on the kingdom to abolish its “kafala” sponsorship system, branded by critics as a modern form of slavery that binds workers to their Saudi employers.

The Saudi human resources and social development ministry said that from March 14, expatriates will no longer need their employers’ authorization to change jobs, travel or leave Saudi Arabia, which is home to some 10 million foreigners.

“This initiative will improve and increase the efficiency of the work environment,” the ministry said in a statement carried by the official Saudi Press Agency.

The reforms, if fully implemented, could have a big impact on the Saudi labor market and the lives of blue-collar foreign workers who lack effective recourse against overcrowded housing and exploitative employers.

Sattam Alharbi, a deputy minister at the ministry, said the changes will abolish “runaway” reports against foreign workers who do not report for duty, which effectively makes criminals at risk of being jailed and deported.

“These changes are not small changes — it’s huge,” Alharbi told Bloomberg News in an interview on Wednesday.

However, he said the new regulations will not apply to the country’s 3.7 million domestic workers, a highly vulnerable category of employees who are governed by separate regulations which he said are also under review.

Human Rights Watch (HRW) only last week said the kingdom had one of the most restrictive kafala systems in the Gulf, which it said facilitates “abuse and exploitation including forced labour, trafficking, and slavery-like conditions”.

“Saudi Arabia’s wealth and economy has been built on the backs of millions of migrant workers and it is time for deep-rooted change to accord them the legal protection and guarantees for their rights that they deserve,” it said.

The kafala system persists even after Saudi media reported in February that the government would “soon” abolish it.

Rothna Begum, a senior researcher at HRW, said the announced reforms are significant but fall short of completely dismantling the system, with employers still able to cancel workers’ residency at any time.

“This can mean that workers can still face abuse and exploitation as employers hold this power over them,” she told AFP.

The exclusion of migrant domestic workers from the reforms was also problematic given that many are forced to work excessive hours without rest, denied their wages and even subjected to physical and sexual abuse, she said.

Foreign workers in Saudi Arabia say they are often vulnerable to extortion from their sponsors, who can demand a portion of their salaries in order to continue working legally after many arrive heavily indebted from their home countries.

After the disruption that came with the coronavirus pandemic, campaigners say potentially hundreds of thousands of “illegal” workers — many of whom have become undocumented through no fault of their own — remain stranded in Saudi Arabia.

Activists have asked the kingdom to offer an amnesty to migrant workers who are trapped by their debts and not allowed to work to pay them off — a predicament that risks fuelling the pandemic.

“The Saudi authorities need to fully abolish the kafala system to ensure that all migrant workers are able to enter, reside and leave the country without being dependent on a single employer or sponsor,” Begum said.

Neighboring Qatar is also scrapping key aspects of its labor rules, including the requirement for some workers to obtain their employer’s permission to change jobs and exit permits to leave the country.

It has passed a series of reforms since being selected to host the 2022 World Cup, setting in motion a vast construction program employing foreign workers that has come under constant fire.