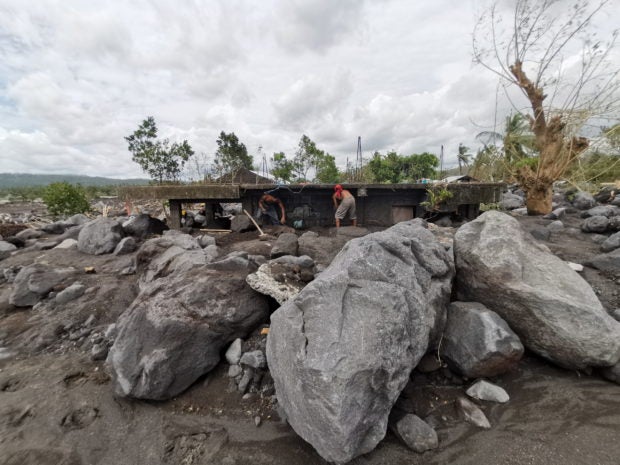 BURIED Lahar and boulders rolling down the slopes of Mayon Volcano bury this two-story house at Barangay San Francisco in Guinobatan town, Albay province, during the onslaught of Typhoon “Rolly.” —GEORGE GIO BRONDIAL

LEGAZPI CITY, Albay, Philippines — Albay officials said the lahar that buried communities in Guinobatan town during the onslaught of Typhoon “Rolly” (international name: Goni) should not be blamed on quarrying around Mayon Volcano, with the province’s disaster response chief noting that it had minimal contribution to the rampage of volcanic materials.

Residents of San Francisco and Travesia villages in Guinobatan lost around 180 houses and their farms, which were buried when lahar and boulders rushed down the slopes of Mayon when the typhoon pummeled the Bicol region on Sunday.

Some claimed quarrying activities along river tributaries in the village of Maninila caused the destruction. They brought this to the attention of President Duterte when he visited the town on Monday.

They said sand stockpiles along the riverbanks had mixed with ash deposits dislodged by heavy rain dumped by Rolly, creating lahar that buried houses in their villages.

But a social media post by the provincial information office quoted Gov. Al Francis Bichara as saying quarry operators did not stockpile sand and other materials along river channels on the slopes of Mayon because “they will have to save what they work for.”

Cedric Daep, chief of the Albay Public Safety and Emergency Management office, was firm that the lahar flow in Guinobatan was not the result of quarrying.

“There are huge volumes of deposits and the amount of quarry that could have caused it is very minimal,” he told the Inquirer.

Daep said lahar deposits had been estimated to reach millions of cubic tons and lahar could only be blamed on the amount of rainfall. Rainfall volume during the onslaught of Rolly, he said, was 60 millimeters per hour, way beyond the “violent” rainfall level of 50 mm per hour.

Daep also said that in 1993 and 2006, similar lahar slides happened after strong typhoons.

Before 2006, he said, Typhoons “Reming” (Durian) and “Milenyo” (Xangsane) also caused water siltation in river systems along the slopes of Mayon.

“We first had Typhoon ‘Quinta’ (Molave) [before Rolly struck], which caused river channels to overflow and with lahar nowhere else to flow,” he told the Inquirer. “So if ever quarrying had [anything] to do with it, it is very minimal. The volume of deposits there, even without quarrying, would cause the same.”

Lahar [flows] were also recorded in the towns of Camalig and Sto. Domingo, and in the cities of Ligao and Legazpi.

Vice Gov. Edcel Grex Lagman, presiding over Tuesday’s session of the provincial board, supported the positions taken by Bichara and Daep, and called on Albay residents to look at the matter based on science and facts.

Daep said an aerial survey after Rolly left Bicol showed that river channels on Mayon’s slopes were heavily silted.“The way I see it, if we have another typhoon, we will have another lahar flow with or without quarrying,” he said.