Polls start to close in tense US presidential election 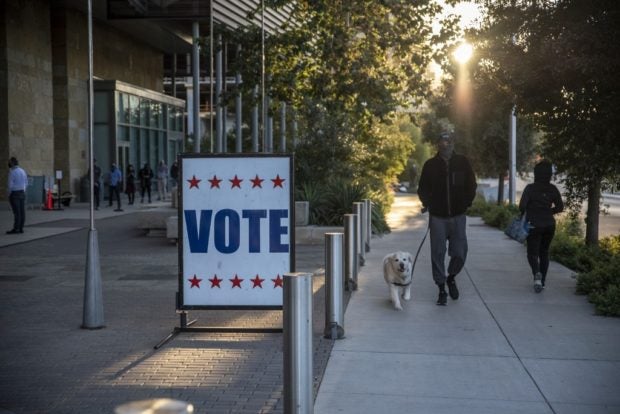 Voters wait in line cast their vote on November 3, 2020, in Austin, Texas. – Americans were voting on Tuesday under the shadow of a surging coronavirus pandemic to decide whether to reelect Republican Donald Trump, one of the most polarizing presidents in US history, or send Democrat Joe Biden to the White House. (Photo by Sergio Flores / AFP)

WASHINGTON — Polls in US battleground states began to close Tuesday, inching the contest between President Donald Trump and Joe Biden to its nail-biting conclusion, following a race fought in unprecedented conditions of a global pandemic and the most deeply divided electorate in decades.

CNN and NBC already projected a win for Trump in Indiana.

Parts of Florida — an even bigger electoral prize that routinely sees knife-edge elections — were also closing at 7:00 pm. Polls in the rest of the state and also in Pennsylvania, another ground zero in US presidential contests, were closing at 8:00 pm.

What was not expected immediately was a definitive verdict on whether Trump gets another four years or Biden pushes him out of the White House.

Barring upsets in key states, that may not happen until all the swing states have counted their ballots — something that in the case of Pennsylvania could easily drag on at least into Wednesday.

Counting this year has been slowed by the unprecedented use of mail-in ballots in response to fears of the coronavirus. More than 100 million Americans had already cast votes before Election Day.

Trump, 74, expressed confidence as the evening approached, tweeting in all his characteristic all-caps “WE ARE LOOKING REALLY GOOD ALL OVER THE COUNTRY. THANK YOU!”

He was watching the results come in at the White House, surrounded by staff. It was not clear whether he’d speak to the public at some point but he said earlier Tuesday that he wasn’t yet “thinking about a concession speech or acceptance speech.”

Biden, hunkered down with family at home in Delaware, likewise said that voter patterns during the day seemed to favor his side.

“The things that are happening bode well for the base that has been supporting me.”

Trump has repeatedly refused to confirm he will accept the results of the election — a first for a US president. He argues, without offering proof, that the vast number of mail-in ballots could be used to rig the polls against him.

In the final run-up to Election Day, Trump focused especially on Pennsylvania, which allows ballots postmarked by Election Day to be counted, even if they arrive afterward.

“You can’t have these things delayed for many days,” he said, adding ominously that “a lot of bad things” can happen.

“We should be entitled to know who won on November 3,” he said.

However, he somewhat dampened fears that he will try to declare victory prematurely, telling Fox News that he will only declare “when there is victory.”

“There is no reason to play games,” he said.

Americans could not be more divided over Trump.

For some he represents a breath of fresh air who brought his business instincts to shake up the Washington establishment. For the other half of the country, he is a corrupt leader who wrecked the US reputation abroad and stoked dangerous racist and nationalist sentiments at home.

In Miami, Juan Carlos Bertran, a 60-year-old Cuban-American mechanic, said Trump “seems better to me for the country’s economy.”

But voting in New York, Megan Byrnes-Borderan, 35, said Trump’s threats to challenge the election results in the courts were “scary.”

“I believe that Trump will go through all odds to try to win the election,” she said.

Another New York voter, Justin Rodriguez, 32, said he was voting for Biden. “I really don’t like the tension,” he said. “I think Trump has brought a lot more tension than we usually have.”

Fearing unrest, store owners boarded up windows in Washington and other major cities.

Biden has targeted widespread public disapproval for Trump’s handling of the Covid-19 pandemic, which has killed more than 230,000 Americans.

Trump — who recovered quickly from his own bout with the virus in October — is gambling that Americans want to put the crisis behind them and reopen the economy fully. Biden, in contrast, is preaching caution and accuses the president of having abandoned his basic responsibilities.

Fears of Covid-19 drove the huge flow of early voters, encouraged by Biden. Trump has countered by holding dozens of mass election rallies with no social distancing, underlining his message that it’s time to move on.

Roughly one-third of the Senate is up for grabs and Republicans risk losing their 53-47 majority.