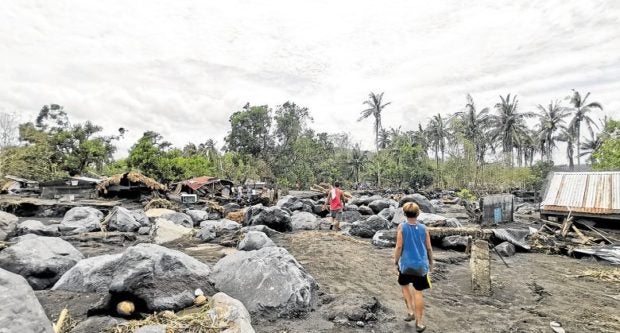 ROCKY ROAD Large rocks came with avalanches of volcanic ash and mud from the slopes of Mayon Volcano triggered by heavy rains and ferocious winds brought by Typhoon “Rolly” as it lashed Albay province on Sunday. The rocks and volcanic flow swept away houses and rendered roads impassable in San Francisco village, Guinobatan town, raising complaints against quarrying in the province that President Duterte ordered investigated. —GEORGE GIO BRONDIAL

LEGAZPI CITY, Albay, Philippines — Quarrying around Mount Mayon will stop immediately as ordered by the Department of Environment and Natural Resources (DENR) on Monday night, but only once the agency sends a formal communication to the Albay provincial government, the Mines and Geosciences Bureau (MGB) said on Tuesday.

Guillermo Molina, MGB director for the Bicol region, said he was instructed by Environment Secretary Roy Cimatu to suspend quarrying in Albay and investigate complaints by villagers in Guinobatan town, who reported to President Rodrigo Duterte on Monday that quarrying was the trigger for devastating avalanches of lahar—volcanic ash and mud — from the slopes of Mt. Mayon.

Upon arrival in Manila, the President instructed Cimatu and Public Works Secretary Mark Villar to investigate quarrying around Mayon.

Cimatu immediately ordered a halt to quarrying around the volcano and suspended the permits of 12 groups operating in the area.

He said he learned from initial investigation that the quarry operators had left their stockpiles on river channels. When Rolly struck, floodwaters and lahar flow from the slopes of Mayon ran down into the channels with the stockpiles, which also contained boulders, he said.

Actually, the lahar flood either swept away or buried at least six people in the villages of Travesia and San Fernando in Guinobatan.

On Tuesday, Albay Gov. Al Francis Bichara said in an interview that he welcomed the President’s order for the suspension of quarrying in his province. “Any order from the President will be followed,” he said.

Bichara, however, added that he needed a formal communication about the suspension from the DENR so he could consult with the provincial board on the matter.

He explained that suspending quarrying would significantly affect the construction business in the province. “It will affect government infrastructure projects,” he said.

Albay supplies sand and aggregates to the entire Bicol and the Visayas, Bichara said.

Molina said he would meet with the governor on Tuesday to inform him about the President’s order.

He said he would assess the state of all river channels with links to the slopes of Mayon during the suspension of quarrying. The results, he said, should prove reports that some river channels are heavily silted and have leveled with the riverbanks, allowing water or lahar to breach the banks and inundate surrounding areas during heavy rains.

After the assessment, Molina said a policy would be drawn regulating the extraction of lahar and other volcanic materials around Mayon.

MGB records show that of the 101 quarry operators in the area, 100 have permits issued by the provincial government and one by the mines bureau.

Under DENR rules, quarry operators must have environmental clearance certificates before local governments could give them business permits. The rules also allow operators to extract sand and gravel in not more than 5 hectares of land in a river channel.