'We are not the enemies:' Officials say 'red-tagging' not part of gov't policy | Inquirer News
Close
menu
search

‘We are not the enemies:’ Officials say ‘red-tagging’ not part of gov’t policy 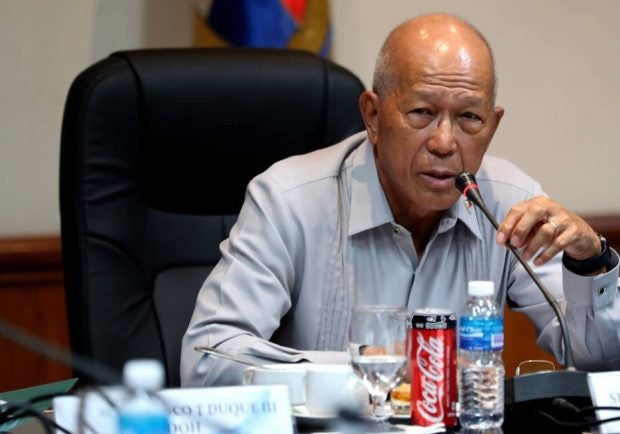 MANILA, Philippines — Top Cabinet officials on Tuesday said the country’s security sector will “debunk” accusations of red-tagging, adding that it is “not part of our agenda nor is it our policy.”

“My colleagues here will be presenting some presentations to actually debunk the accusations of the Makabayan bloc that we are red-tagging them,” Defense Secretary Delfin Lorenzana said during the hearing of the Senate defense committee.

“We will present [evidence] from the NTF-ELCAC [National Task Force to End Local Communist Armed Conflict], from the DILG [Department of the Interior and Local Government],” he added.

Lorenzana also thanked the Senate committee for conducting the hearing, saying it is “very timely so we can expose once and for all the true color of these people who are trying to destroy our democracy.”

‘We are not the enemies’

Meanwhile. Interior Secretary Eduardo Año lamented how the government has been accused of “some sectors” of red-tagging.

“We would like to point out that this whole issue of red-tagging is not a product of our imagination or fancy merely to pin down the opposition as the leftist groups would want it to appear,” Año said.

“In fact it was CPP’s (Communist Party of the Philippines) Joma Sison who red-tagged these left-leaning organizations,” he added.

Further, the Cabinet official emphasized that the government is duty-bound to protect its people.

“It will do everything within its authority to ensure that the people are safe and protected, most especially from the enemies of the people who are like wolves in sheep’s clothing taking advantage of the people’s weaknesses and vulnerabilities so that they would unwittingly join their cause,” he said.

He added that the government is “all for peace.”

“Red-tagging is not part of our agenda nor is it our policy,” he said.

“Let emphasize that we, in the government, are not the enemies here. We all know who the enemies are and they are the communist terrorist groups in the CPP-NPA-NDF (Communist Party of the Philippines, New People’s Army, and the National Democratic Front) and their allies,” he added.

The inquiry came after Armed Forces of the Philippines (AFP) Southern Luzon Command chief Lt. Gen. Antonio Parlade Jr. received criticisms over his statement warning actress Liza Soberano from engaging in women’s group Gabriela, which according to him, is a terrorist front.

Parlade also earlier disclosed that Bayan Muna chairperson and former lawmaker Neri Colmenares and members of the Makabayan bloc are under surveillance for their alleged link to communist groups.