2 more Luzon areas under Signal No. 3 as Rolly moves towards Bicol | Inquirer News 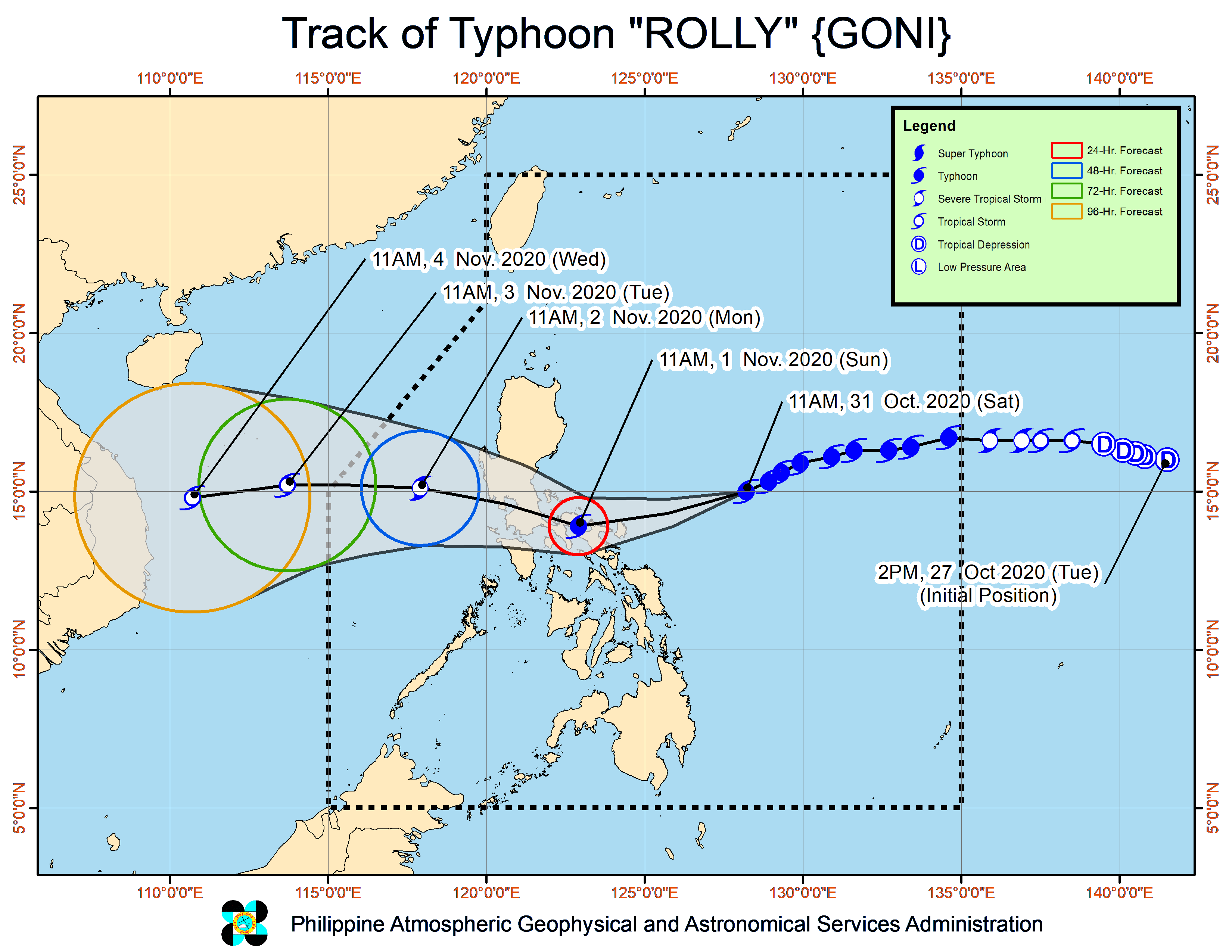 Meanwhile, TCWS No. 2, where winds of greater than 61 kph and up to 120 kph may be expected for at least 24 hours, is raised over:

Based on Pagasa’s latest data, Rolly was spotted at 410 kilometers east northeast of Virac, Catanduanes.

Rolly is packing maximum sustained winds of  215 kph near the center and gustiness of up to 265 kph.

The typhoon was also monitored moving west-southwestward at 15 kph

State meteorologists said that based on its forecast track, the center of the eye of the typhoon is forecast to pass over Catanduanes – mainland Camarines provinces area Sunday morning, and over mainland Quezon Sunday afternoon.

“Violent winds and intense rainfall associated with the inner rainband-eyewall region will be experienced over Catanduanes, Camarines provinces tomorrow early morning through the afternoon and over Quezon and the southern portion of Aurora tomorrow afternoon through evening,” Pagasa said.

“After crossing the Southern Luzon – Metro Manila area, the center of Rolly is forecast to exit the mainland Luzon landmass on Monday morning,” it added.

Rolly is also expected to remain as a typhoon by the time it makes landfall.

Pagasa said that for Saturday,  the outer rainbands of Rolly will bring light to moderate with at times heavy rains over Bicol Region and Eastern Visayas.

Aside from Rolly, Pagasa is also monitoring a tropical depression, named Atsani, outside of the Philippine Area of Responsibility.

Atsani was spotted 1,655 kilometers east of Southern Luzon, and currently has maximum sustained winds of 55 kph near the center and gustiness of up to 70 kph.

It was also moving northwestward at 25 kph.

The tropical depression is expected to enter the Philippine landmass by Sunday afternoon.

Entering the Philippine landmass, Atsani will be given the local name Siony.

Read Next
Yap clarifies: Take away budget from agency execs involved in corruption
EDITORS' PICK
Metro Manila now at moderate risk for COVID-19 — DOH
Pagasa: Storm Luis to exit PAR by Thursday
Peeking inside the superb night camera features of the vivo V25 series
House energy committee chair Arroyo bats for cheap electricity
POGOs not linked to Illegal online gaming, says Pagcor
Do all the things you do, faster
MOST READ
SC affirms conviction of ex-Leyte mayor for allowing illegal cockfights
Airlines cancel 2,000 US flights for Thursday
Remulla lambasts ICC chief prosecutor
Badoy not with Office of the President, NTF-Elcac, under Marcos admin — solon
Don't miss out on the latest news and information.