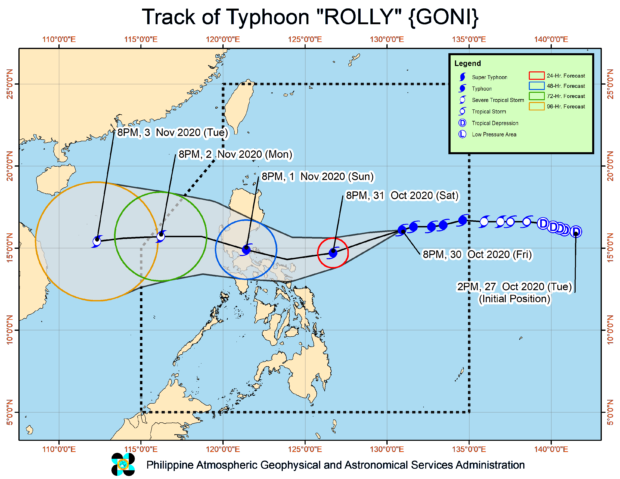 MANILA, Philippines — Metro Manila and parts of Luzon will face the fury of Typhoon Rolly (international name: Goni) Saturday night  as the weather system maintains its strength while moving west-southwest over the Philippine sea.

Moderate to heavy rains, meanwhile, will also be experienced over the Cagayan, Isabela, Nueva Vizcaya, and Quirino, Pagasa said.

Pagasa reported that “Rolly” was last spotted 540 kilometers east northeast of Virac, Catanduanes with maximum sustained winds of 215 kilometers per hour near the center (kph), gustiness of up to 265 kph and moving west at 20 kph.

State meteorologists said that the eye of “Rolly” is forecast to pass very close to Catanduanes in the early hours of Sunday, then over the Calaguas Islands and very close to mainland Camarines provinces Sunday morning, and over Polillo Islands and mainland Quezon Sunday afternoon or evening.

“However, due to the proximity of the forecast track to Bicol region, a landfall scenario over Catanduanes and Camarines provinces is not ruled out,” Pagasa said.

The state weather bureau added that it is not ruling out the possibility that “Rolly” may intensify to a super typhoon.

Tropical Cyclone Wind Signal No. 2 is hoisted over the following areas:

TCWS No. 1, meanwhile, is raised over the following areas: