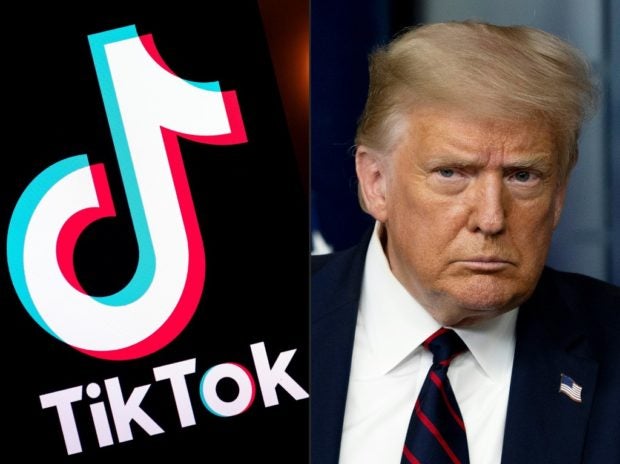 (FILES) In this combination of file pictures created on August 1, 2020 shows the logo of the social media video sharing app Tiktok displayed on a tablet screen in Paris, and US President Donald Trump at the White House in Washington, DC, on July 30, 2020. – Video app Tiktok said on August 22, 2020, it will challenge in court a Trump administration crackdown on the popular Chinese-owned service, which Washington accuses of being a national security threat. (Photos by Lionel BONAVENTURE and JIM WATSON / AFP)

SAN FRANCISCO – A US federal judge on Friday issued an injunction temporarily blocking an executive order by President Donald Trump aimed at banning TikTok, throwing up a legal roadblock ahead of a November 12 deadline.

The order would have knocked the Chinese-owned video-sharing app offline by cutting it off from US businesses providing website hosting, data storage and other fundamentals needed to operate.

But TikTok influencers suing the president over the ban convinced US District Court Wendy Beetlestone to issue the injunction against it.

It is the second restraint issued in favor of TikTok by US judges against a set of executive orders issued by Trump which sought to ban new downloads of the app beginning in September, and ban it outright by November 12.

A temporary injunction issued in September in a separate suit filed by TikTok itself prevented the government from removing it from mobile application download platforms.

Judges in both cases said in rulings that the chances of proving in court that Trump overstepped his authority were good.

They also equated  TikTok to films, photographs, and news wires with legal protections.

Beetlestone noted in her ruling that concerns expressed by the US in justifying the ban were expressed hypothetically.

Trump’s administration has insisted on a need to ban TikTok, which has 100 million users in the US, due to national security concerns.

The White House claims TikTok has links to the Chinese government through its parent firm ByteDance.

TikTok has repeatedly defended itself against allegations of data transfers to the Chinese government.

It says its servers where user information is stored are located in the United States and Singapore.

The company has also said the ban is unnecessary since negotiations are underway to restructure the ownership of TikTok to address national security issues raised by the administration.

A tentative deal has been unveiled that would make Silicon Valley giant Oracle the technology partner for TikTok and a stakeholder in a new entity to be known as TikTok Global.