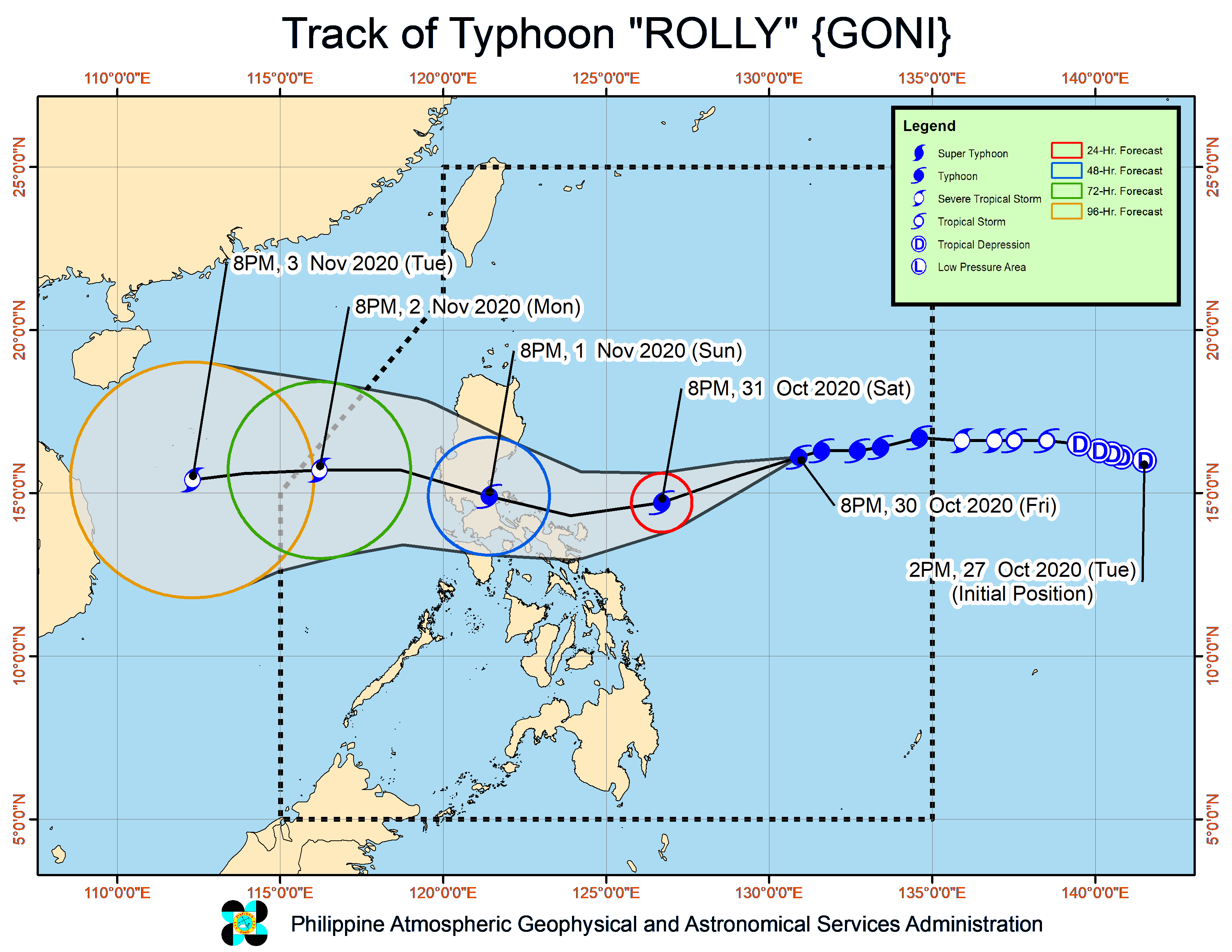 According to Pagasa’s severe weather bulletin posted at 11:30 p.m., Rolly now has maximum sustained winds of 215 kilometers per hour (kph) near the center, and gustiness of up to 265 kph.

It was last seen 895 kilometers east of Casiguran, Aurora, and has started to turn west-southwestward at a speed of 15 kph.

Pagasa still expects Rolly to make landfall over the Aurora and northern Quezon areas on Sunday, possibly near the vicinity of General Nakar town.

But before that, its eyewall would graze Bicol Region provinces between Saturday night and Sunday morning.

A slight deviation in the forecast track of the typhoon, though again puts Metro Manila, Calabarzon provinces, and southern parts of Central Luzon like Bulacan as the possible areas that may directly be hit by Rolly.

Tropical Cyclone Wind Signal No. 1 has been raised in the following areas, which means that they may feel wind speeds of 30 kph in the next 36 hours:

From Friday night to Saturday morning, Rolly’s trough would bring light to moderate with at times heavy rains over Visayas, Palawan including Cuyo Islands, Zamboanga Peninsula, Northern Mindanao, Caraga, and the Sulu Archipelago.

But starting from late Saturday evening, heavy to intense rains due to Rolly will be felt all over Bicol Region, Calabarzon, Metro Manila, Marinduque, and the northern portions of Occidental and Oriental Mindoro.

Strong breeze to near gale conditions would also be due to Rolly’s approach, especially in areas where a Tropical Cyclone Wind Signal is raised.

“The wind signal in some provinces in the Bicol Region will be upgraded to TCWS #2 in the next bulletin as damaging gale-force to storm-force winds is expected to affect these areas within 24 hours from tomorrow early morning,” Pagasa said.

“Based on the intensity forecast, the highest possible wind signal will be TCWS #4,” it added.

A gale warning is now placed over areas under Signal No. 1, as rough to phenomenal seas — with waves as high as 2.5 meters to 15.0 meters — will be experienced. This means sea travel is not allowed in these areas.